Where's That Funky-shaped Comet 'Oumuamua From?

Browse the article Where's That Funky-shaped Comet 'Oumuamua From? 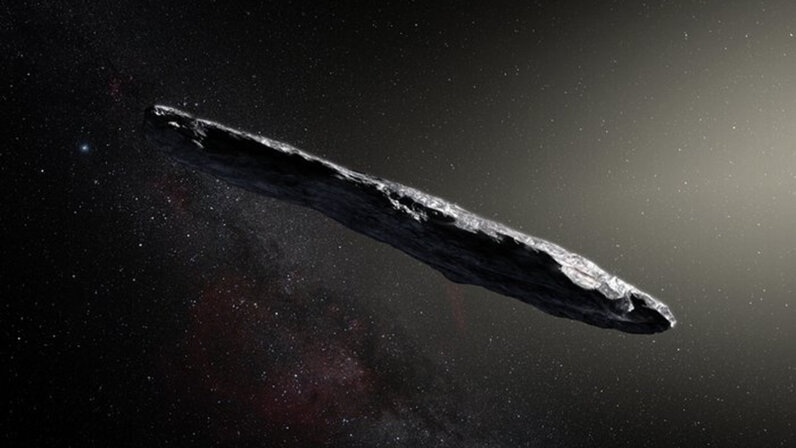 An artist's impression of the comet visitor 'Oumuamua, which was first discovered in our solar system in October 2017. ESO/M. Kornmesser

Like a speeding bullet fired from an unknown and distant star system, the interstellar comet 'Oumuamua dashed through our solar system and was only spotted last year after it had slingshot off our sun's gravity and receded into deep space.

Space rocks from other stars inevitably buzz our solar system all the time, but 'Oumuamua was the first to be positively identified as an interstellar interloper. But where exactly did it come from? Well, astronomers are on the case, and they now have a rough idea as to where in our galaxy 'Oumuamua's birthplace may be located.

With the help of ultra-precise star measurements made by the European Space Agency's Gaia mission and some complex number-crunching, an international group of researchers were able to scrutinize the interstellar comet's path to see which stars, over millions of years of travel time, it may have encountered on its journey. In doing so, they have narrowed it down to four candidate star systems where 'Oumuamua ultimately may have come from.

Since its discovery, 'Oumuamua has been a hot topic. When it was first seen, astronomers noticed that it was shaped like a spinning cigar (or a funky pancake), a characteristic that may reveal interesting things about how it was formed. They also knew that it didn't originate from our solar system; it was traveling too fast and on a hyperbolic trajectory. In other words, the gravity of our sun was too weak to keep it in orbit. Then, follow-up observations didn't reveal any gas venting from the candidate comet, suggesting that, perhaps, it was actually an asteroid devoid of ices.

The "is it an asteroid or is it comet?" debate was finally settled when astronomers calculated 'Oumuamua's trajectory and realized it had received a small boost as it was heated by our sun – venting gas from vaporizing ices was released, creating a tiny thrust to speed it up. This meant that although the object didn't have an obvious coma and tail usually associated with comets, it was a comet nevertheless.

With all this information in hand, the next task was to identify its origins, and astronomers have attempted just that with a surprising degree of precision. They describe their efforts in a study accepted in September 2018 for publication in The Astronomical Journal.

The interstellar comet had been drifting through interstellar space for unknown millions of years, but by back-tracking its trajectory through the solar system, astronomers could get a general idea as to where the object was traveling from in our galaxy and which stars it may have encountered along its way. For help they turned to the rich array of information from Gaia's Data Release 2 (GDR2), which was made available to the scientific community in April.

"GDR2 provides us with the 3-D positions and 3-D velocities for 7 million stars," astronomer Coryn Bailer-Jones, who works at the Max Planck Institute for Astronomy in Heidelberg, Germany, explains. "Without such information it would be impossible to trace the orbits of the stars back in time."

Before Gaia, the best data set we had came from the European Hipparcos satellite, which was in operation until 1993 and the first mission to carry out precision astrometry (an astronomical method to measure the positions and movements of stars) and complemented by other ground-based surveys. This database contains 2.5 million stars. Launched in 2013, Gaia is far more advanced and contains precise information about the positions, motions and distance of 1.3 billion stars. Seven million of those also contain information about their radial velocity (i.e., the speed at which the star is moving either toward or away from us). A further 220,000 stars were added to the analysis for which their radial velocities were known.

Knowing the area of sky that 'Oumuamua originated from, Bailer-Jones and his team were able to select 4,500 stars from GDR2 that the interstellar traveler may have encountered on its long journey. But to narrow this number down even further, they had to turn back time and trace out the motions of these stars and see if 'Oumuamua's path through the galaxy would have crossed, or come near to, their historic motions.

This analysis may seem like an impossible task. After all, there are many stars creating a helter-skelter-like gravitational landscape through which 'Oumuamua would have traveled. How did the researchers calculate its path?

"In principle, we would need to know the path and mass of every star in the galaxy, as well as the dark matter, in order to trace orbits back in time," explains Bailer-Jones. "In practice, this is not necessary; we can approximate it using a smooth gravitational potential model, which takes into account both the visible matter and the dark matter [in our galaxy]."

There's a problem with making this approximation, however. This model doesn't evolve with time, and it loses precision over longer time frames. "Consequently, while we can be reasonably confident about tracing orbits back in time for say a few tens of millions of years, beyond that the uncertainties build up too much for us to say anything with good confidence," he says.

That's not to say the researchers don't have candidates. In fact, they have found four dwarf stars that 'Oumuamua traveled pretty close to and are within the margin for error as the comet's original home.

The closest pass was made with the reddish dwarf star HIP 3757 approximately 1 million years ago. On that occasion, the researchers calculate that 'Oumuamua came within 1.96 light-years of the star, making it a possible candidate as 'Oumuamua's home. However, the star's large relative speed (it's moving at a breakneck pace of 25 kilometers, or 15.5 miles, per second) makes this less likely.

The next closest pass was 3.8 million years ago with the sun-like star HD 292249. This star's relative velocity of 10 kilometers (6 miles) per second makes it a more likely contender as 'Oumuamua's home. Encounters with the other two stars — unnamed but previously catalogued by other surveys — occurred 1.1 and 6.3 million years ago and are traveling at intermediate speeds. Astronomers don't know if any of these stars possess their own planetary systems. To eject a comet like 'Oumuamua into interstellar space, the presence of a large gas giant planet will likely be needed to provide the gravitational oomph.

These four stars aren't the only candidates, however, they're just the best candidates the researchers have found using the current data sets made available by Gaia. As more information about more stars is recorded by the survey mission, more possible candidates may present themselves as 'Oumuamua's home.

Gaia's Data Release 3 (GDR3) should come in 2021, adds Bailer-Jones, who is also a member of the Gaia Data Processing and Analysis Consortium. This release will add more radial velocity data and should narrow down the search for 'Oumuamua's origins. "This will allow us to trace back the orbits of many more stars," he says, "whether there are better home candidates among those, we don't know. We'll have to do it to find out."

Now That's Interesting
The Oort Cloud may be home to more than a trillion comets, according to NASA. Astronomers think the far-distant region of space encircles the sun, the planets and the Kuiper Belt.