Why is the LHC 27 kilometers in circumference? 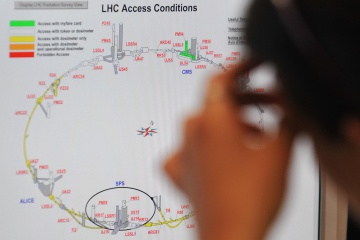 A scientist puzzles over a map of access conditions at the Large Hadron Collider just a few days before the massive underground laboratory first turned on in September 2008.
Fabrice Coffrini/AFP/Getty Images

Stephen Hawking once pointed out that if we wanted to leap through time, it would help if we had a machine like the LHC that could accelerate us to nearly the speed of light. Yes sir, the LHC is impressive enough for Hawking to see it as a time travel transportation option. And it certainly didn't get its reputation for nothing: The hulking particle accelerator earned its stripes when it gave us evidence for the Higgs boson in 2012 and 2013. Finding the Higgs in the LHC basically confirmed the Standard Model of physics, which outlines the fundamental particles and forces in the universe. No small feat.

Of course "small" isn't a term we usually associate with the LHC, or the European Organization for Nuclear Research (CERN) for that matter. Consider the accelerator complex at CERN, which is a lot more than just the LHC. If you were to just dump protons into the LHC without any preliminary steps, there wouldn't be much experimentation to speak of: You need to not just speed up the protons before they enter the LHC, but also concentrate them in dense beams. In order to do that, there are a few steps that need to be taken before they whiz off to their violent fate in the LHC [sources: LHC Facts, CERN]:

And now here we are: in the vast Large Hadron Collider. It looks like a beautiful crystal cave. (Just kidding, it looks like a brightly lit, obsessively clean subway tunnel with a giant pipe running through it.) Why do such itty-bitty pieces of barely-matter need such a big space to roam?

The first answer is a bit anticlimactic: We started off using the LHC because it was already there. CERN had a previous accelerator (the Large Electron-Positron Collider) that initially occupied the space, and it was that big to accommodate the collisions of (you guessed it!) electrons and positrons. So why was the LEP that size or even built 328 feet (100 meters) underground?

It was built underground for a pretty basic reason: It proved cheaper to simply excavate a tunnel than to buy land and mitigate environmental impacts [source: CERN]. (It also needed to have a bit of a slope to minimize costs resulting from the placement of vertical shafts.) But the reason the LEP had such a broad circumference gets to the heart of why the LHC needs a wide berth, as well: The lady needed a nice set of curves.

The rounded bends of the LHC are necessary for that acceleration that's so important to our particle pals. It all starts with Newton's laws of motion, which says that a particle (or anything, for that matter -- no pun intended) will travel at a constant speed unless acted on by a force. What does this mean? That particle will travel in a straight line at the same speed unless there's something used to accelerate them.

Answering why the LHC is circular might not seem to have anything to do with its size, but it does relate. A smaller racetrack for the protons would mean that they would need to accelerate more to accommodate the sharper curves, and would lose more energy -- and thus the collision wouldn't be as strong [source: Butterworth]. So a large radius is needed to get the particles' energy high enough to both accelerate and create collisions.

And don't think that all the scientists are satisfied with the size of the current LHC. There are serious considerations being made to build a 62-mile (100-kilometer) track that will provide an even more energetic course for particle collisions [source: Pease]. Keep in mind that the higher the energy achieved, the more massive the particles that can be found -- an important way to identify new elusive, heavy particles [source: Reich].

Author's Note: Why is the LHC 27 kilometers in circumference?

Sure, it's kind of off-topic, but I think we all want to know: What would happen if we stumbled into the LHC while the proton beams were working their magic? Nobody's entirely sure, but it's a pretty good guess that you'd have a hole blasted through your body, and perhaps a cone of proton-exploding impact, as well.

Could an 'X17 Particle' Hint at a Fifth Force in the Universe?
What Are the 7 Diatomic Elements?
Sine Us Up: It's Square Root Day.