Why Galaxies Come in Different Shapes

Browse the article Why Galaxies Come in Different Shapes 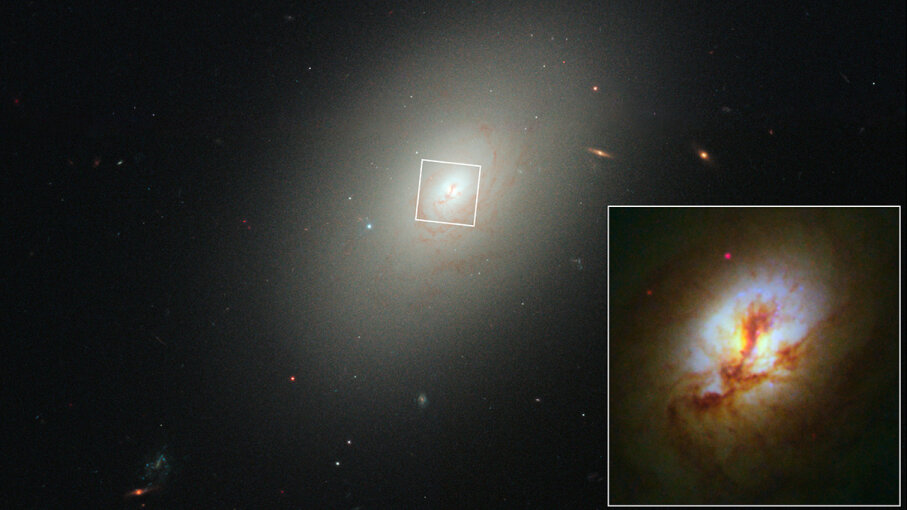 Hanging on the walls in countless science classrooms around the world are illustrations of our home galaxy, the Milky Way. You've probably heard of it. But you probably didn't know that those posters are proportionately thicker than a key component of the galaxy itself.

That's right. Like a fried egg, the Milky Way consists of a central bulge surrounded by a flat, thin disc. And when we say "thin," we mean mind-bogglingly thin. As physicist and Forbes correspondent Jillian Scudder points out, the "disc" of the Milky Way galaxy is around 100,000 light years long, but only about 0.6 light years tall. This means that, proportionally, it's 30 times thinner than a typical sheet of printer paper.

Astronomers have estimated that there are around 200 billion galaxies in the observable universe. But when we see other galaxies portrayed in science fiction films, they tend to have the same basic shape as ours. This would be an example of our human-centered biases. Although many of them do resemble the Milky Way, others come in wildly different shapes and forms.

How Galaxies Get Their Shapes

Before we go any further, let's take a step back and talk about what all galaxies have in common. Galaxies are complex systems held together by gravity. They're made up of gasses, stellar dust and millions — sometimes even billions — of stars, which are accompanied by their own planets and asteroid belts.

Yet similarities aside, every galaxy has a unique story to tell. The history of each one is reflected in its shape. Scientists divide galaxies up into a handful of appearance-based categories. The Milky Way is what's known as a spiral galaxy, meaning that it looks like a broad, flattened disc with a slight bulge protruding outward at its center.

That arrangement is the product of rotation speed, time and gravity. To learn more, we talked to astrophysicist Raja GuhaThakurta, Ph.D., a professor at the University of California Santa Cruz, and authority on the study of how galaxies evolve. It's a field that invites a lot of debate.

"The physics of how these things form is not completely known or settled," GuhaThakurta says. Nonetheless, it's widely thought that most spiral galaxies begin their lives as spinning clouds of gas and dust. The speed at which they rotate matters a great deal. According to GuhaThakurta, massive, rapidly rotating clouds are more likely to become spiral galaxies.

Gravity attempts to pull these spinning, amorphous bodies into flattened planes. Over time, the clouds are forced to contract because of gravity and loss of energy due to friction. And due to a principle called the conservation of angular momentum, when a spinning object contracts, it rotates more rapidly. You can see this in action at your local skating rink. Experienced ice skaters know to increase their twirl speed by drawing their arms inward.

So, much like a spinning blob of pizza dough, spiral galaxies are formed when shapeless gas/dust clouds flatten out at high speed. The same physical forces also effect the look of the pointed "arms" that can be seen around the rims of such galaxies.

"The types of spiral arms are almost certainly related to the rotation rate," GuhaThakurta says. Rapidly rotating systems tend to have a ring of small, tight arms. In contrast, those that move more slowly have longer, loosely wrapped ones. To understand why, GuhaThakurta recommends trying a little home experiment: "Imagine stirring your coffee. Put a dollop of cream somewhere other than the center. You'll notice that the cream will form a spiral pattern," he says. Then, stir the brew with a spoon. If you do so rapidly, the pattern's arms will get smaller and tighter.

Galaxy NGC 4302n (left) and galaxy NGC 4298 (right) are examples of spiral galaxies like our Milky Way. They appear different in the image taken by Hubble Space Telescope on April 24, 1990 because they are angled at different positions on the sky.
NASA and The Hubble Heritage Team

The Mystery of the Bulge

Okay, time for a quick recap. Thus far, we've talked about how spiral galaxies develop and how rotation shapes their arms. But what's the deal with those bulges we mentioned earlier? At the center of spiral galaxies, you'll find a cluster of very old stars revolving around a central point. This is the bulge. While the stars out in the disc move around in an orderly, horizontal plane, the stars that comprise the bulge act like bees erratically swarming around a hive. Astronomers are still trying to figure out how these bulges form. Some speculate that they develop before the rest of a spiral galaxy does, while others think the reverse is true.

Now imagine a galaxy that's all bulge. This thing would be disc free and either look like a giant, rounded sphere or a massive American football. Inside, its stars would be orbiting the galaxy's central point in all directions. Congratulations, you've just pictured an elliptical galaxy. GuhaThakurta says elliptical galaxies form when two spiral galaxies of comparable mass merge together. (Although he adds that this might not be the only process by which elliptical galaxies are formed.)

Incidentally, our very own Milky Way is about to participate in one of these mergers. Experts project that it will eventually collide with the nearby Andromeda galaxy, a process that'll reconstitute these two spiral galaxies into one elliptical galaxy. The process should begin about 3 billion years from now and finish in an additional 4 billion years from then. Obviously, it's not something you or I will live to see. But regardless, scientists have already come up with a name for this future elliptical galaxy: They call it "Milkomeda." Everyone loves a good portmanteau.

It should be noted that some galaxies are neither spirals nor ellipticals. So-called irregular galaxies lack bulges and can come in a wide variety of shapes. Furthermore, scientists have observed some galactic mergers that are currently in progress. Maybe they'll look like nice, well-rounded ellipticals someday, but at the moment, these developing unions appear disorganized and distorted. There are also a few documented examples of big spiral galaxies cannibalizing smaller ones that have gotten too close, with the victim getting slowly devoured bit by bit. As Hannibal Lecter might say, pass the fava beans and chianti.

A near galactic-collision between NGC 2207 (left) and IC 2163 (right) spiral galaxies captured by the Hubble Space Telescope in 2007. Scientists predict the Milky Way will collide with our neighbor galaxy Andromeda in about 3 billion years from now.
NASA and The Hubble Heritage Team
Now That's Interesting
The word "galaxy" is derived from the Greek word "gala," which means "milk" — as in "milky way." Ours has a luminous band of stars that's clearly visible in the night's sky. To ancient astronomers, this looked like a swath of spilled milk.