What is the Ansari X Prize? 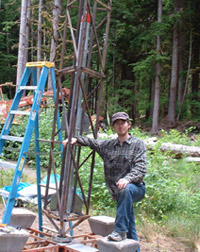 So, just what is the Ansari X Prize? Simply put, it's a contest that promised a cash prize of $10 million to the first registered team to:

The feat had to be completed by January 1, 2005, so SpaceShipOne took the prize with lots of time to spare. In addition to the cash purse, the winner received a 5-foot-tall (152-cm), 200-pound (90.7-kg) bronze trophy. (See Ansari X Prize Trophy for a look at the design.)

No financial help could be accepted from any government -- this means no government grants, no government subsidies, no NASA ships and no NASA parts. There was no lack of private donors, however. The star-studded list of contributors include Microsoft co-founder Paul Allen (Scaled Composites' SpaceShipOne), the original space tourist and millionaire Dennis Tito, Charles Lindbergh's grandson Erik Lindbergh, former astronaut and U.S. Senator John Glenn, author Tom Clancy and actor Tom Hanks.

People from all countries of the world were able to compete for the X Prize, and more than 20 teams from seven countries were registered. Contestants had to submit a $1,000 registration fee along with a detailed description of the proposed vehicle and mission, and they had to agree to follow the rules and specifications above (for a look at the specific documents that were required, see Ansari X Prize: Register as a Team).

Impact of the Orteig Prize

As a result of hotel magnate Raymond Orteig's aviation contest and Lindbergh's successful flight, in the United States:

Only time will tell if the Ansari X Prize will have a similar effect on the burgeoning sub-orbital flight industry. Already, the Federal Aviation Administration (FAA) has created and issued two new licenses for sub-orbital space travel.