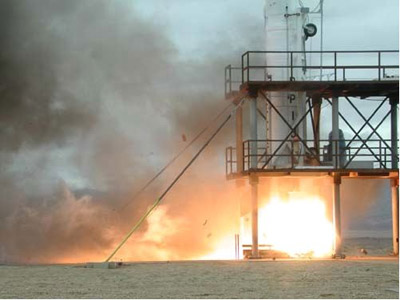 After registration as an official X Prize contestant and all of the challenges of planning and building a spaceship that followed, a team ready for launch faced yet another roadblock: launch licensing. Most countries require a license to fly any vehicle into the air, and launching something into space and back definitely falls under that heading. In the United States, the Federal Aviation Administration (FAA) requires an Experimental Aircraft Certificate and a Space Launch License. The application form is fairly simple, but the process that follows is not: The FAA's Applicant Checklist is divided into four phases, which include frequent meetings with FAA officials and regular inspections of the project's progress.

Another thing to keep in mind: According to the FAA, you can't just build and launch a sub-orbital rocket in your backyard. Launches are allowed only at specific government-funded and privately funded sites (see FAA: Launch Sites); however, according to X Prize rules, a team could not use a government site unless it was open to all teams (including those from other countries).

Only two sub-orbital, manned rocket-launch licenses have ever been awarded in the United States, both of those within the last six months. Add the time it takes to get FAA approval to the 60-day notice required by the X Prise Foundation to launch, and time was of the essence.

Therefore, many teams came quite far in their development of spacecraft but could not get ready to launch before the January 1, 2005, deadline. Their ideas and technological innovations will live on, however. In the next section, we'll a look at some of the teams that were involved in the Ansari X Prize.

To view the FAA guide to RLV approval, including the application and checklist, visit the FAA and Industry Guide to Reusable Launch Vehicle (PDF).

To check out the process of approving an RLV, see RLV Safety Approval Process (PDF).