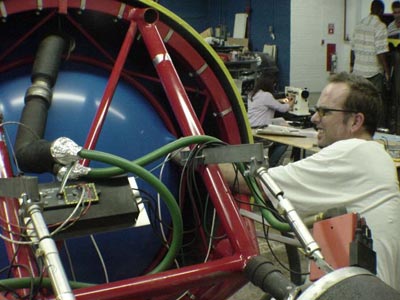 To understand the challenges the X PRIZE teams faced and the individual solutions they engineered to conquer them, you may need to brush up on some basic rocket science. (If you're up for a more extended course in rocket science, be sure to check out How Rocket Engines Work.)

When creating a space-bound rocket, you need to know about two main things:

These two basic elements affect the complex Ansari X Prize spacecraft similar to the way they'd affect something as simple as a golf ball. When a golfer takes a swing, the golf club functions as the propulsion system and thrusts the golf ball high into the air, flying in the direction of the swing. Because it is hit from the side, it forms a long, wide arc before returning to the ground. If the ball could be hit from the bottom, it would go straight up -- which is pointless for golfers but great for rocket scientists.

The traditional way of propelling a rocket or a spacecraft into sub-orbit is to fire up the propulsion system directly beneath the vehicle to thrust it straight up. Upon reaching burnout (the point at which all of the fuel is used up), the rocket continues to ascend for a short time. As it slows down from lack of propellant, it begins to make an arc -- this is where it reaches its highest point (or altitude), known as apogee. It then begins to descend, completing the arc until it falls in a straight line back to the Earth's surface. To prevent the destruction of the rocket on impact, many are equipped with parachutes to slow the fall.

There are plenty of resources for the at-home rocketeer. Do-it-yourself, beginner rocket kits -- complete with engines -- can be purchased for as little as $5 to as much as $150 at hobby stores nationwide. For the serious hobbyist or budding rocket scientist, high-powered versions can be purchased that fly as high as a commercial jet -- more than 30,000 feet (9,144 meters). A word to the wise: Use of these and H-class rockets require National Association of Rocketry approval for a reason -- these launches can be dangerous. FAA approval may be required as well.

In the next section, we'll describe some of the technology used in the X Prize competition and take a detailed look at the top teams' flight plans.