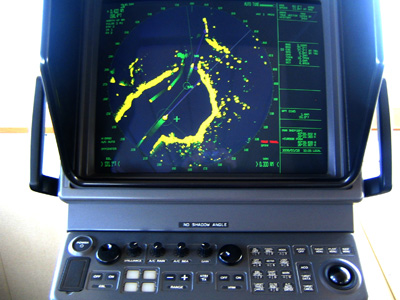 Zumwalt will need to reduce their electromagnetic energy so they don't show up on surface search radar displays like this one.
Photo courtesy of Clipper

The DDG 1000 has been designed specifically to participate in both traditional military engagements, as well as those that might arise as part of the global war on terrorism. Like destroyers in the Arleigh-Burke class, the DDG 1000 will be multi-mission, capable of providing forward deterrence and presence, and an integral part of joint and combined expeditionary forces. But unlike today's destroyers, the primary mission of the DDG 1000 will be land attack support for ground forces. In fact, one of its most important requirements didn't come from the U.S. Navy, but from the Marine Corps, which, in 2002, requested that the Navy provide 24/7, all-weather, long-range missile-firing capabilities in support of USMC amphibious operations. That means the DDG 1000 will need to operate efficiently in shallow coastal waters - not in quick, hit-and-run missions, but in engagements that may last days or weeks.

Having a persistent presence in littoral areas is one of the most important design requirements of the Zumwalt class destroyers. Now let's look at some of the ship's other requirements, as outlined by Navy planners:

While cruising in hostile waters near an enemy's coastline, the DDG 1000 can expect attacks from cruise missiles and small boats. Clearly, it will need to effectively defend against these threats, as well as those from submarines and surface mines. It will also need to have systems in place to minimize damage caused by missile strikes.

It may seem impossible to make a 600-foot long ship invisible to the enemy, but that's one of the DDG 1000's most important requirements. That means the ship will need to dampen engine noise and reduce the amount of electromagnetic energy (radar and infrared, for example) that it reflects to enemy detectors.

From the beginning, Navy planners envisioned the DDG 1000 as an all-electric ship to meet ever-increasing power demands. Approximately 80 megawatts of electricity - nearly 10 times the power available on today's Arleigh-Burke class destroyers - will power all of the major systems of the ship, including gun turrets. The electric motor designed to power the propellers will be one of the most advanced in the world, capable of maintaining a top speed of 30 knots.