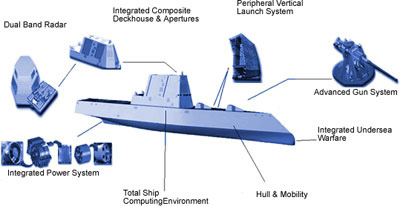 The DD(X) is a future class of U.S. Navy destroyer, designed as a multi-mission ship with a focus on land attack.
Photo courtesy of the U.S. Navy

To make sure the requirements outlined in the previous two sections are met, the DDG 1000 will feature numerous innovations never before seen on a warship. Here are some of the most critical technologies being built into the Zumwalt class destroyer:

The low, angular deckhouse gives the Zumwalt class destroyer a sleek, modern look quite unlike any warship that has come before it. This distinctive appearance is only enhanced by the DDG 1000's hull, which slopes inward from above the waterline. Known as a "tumblehome" hull, this feature allows the ship to slice cleanly through waves, optimizing speed and maneuverability while decreasing acoustic and infrared signatures.

The firepower of the DDG 1000 will be formidable. At the heart of the ship's weapons systems is something called the Advanced Gun System, or AGS, a pair of 155-mm guns capable of firing Long Range Land Attack Projectiles (LRAPs). An LRAP is a GPS-guided shell that can provide a precision strike on a target located as far as 100 miles away. Six hundred LRAPs can be fired from Zumwalt class destroyers in 30 minutes, giving the ship true rapid-fire capabilities that exceed those provided by the twelve 155-mm howitzers present on Arleigh-Burke class destroyers.

In addition to the AGS, the DDG 1000 also features 80 vertical missile launchers staggered around the ship's perimeter. Each launching system comes with modular electronic architecture, making it easy to accommodate both existing and future missiles for land attack, anti-ship, anti-submarine and anti-air warfare. Each system is also self-contained and fully armored to limit and isolate battle damage.

Finally, two 57-millimeter close-range guns fire 220 rounds per minute from the bow of the ship. Both guns fold down and tuck away for stealth.

Look at a typical battleship, and you'll see an array of spinning dishes and antennas sitting atop a high-profile mast. Unfortunately, this design, which provides a greater area to reflect energy, makes the ship much easier to detect on enemy radar. To overcome this problem, the DDG 1000 will integrate its communications hardware directly in the deckhouse "skin," which will be made with rugged, lightweight composites.