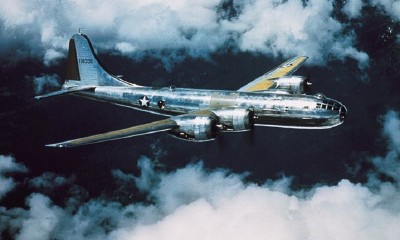 By March 1945, LeMay turned his big Boeing B-29 Superfortresses to nighttime, low-level incendiary raids against Japan. During the nights of March 10-20, incendiaries dropped from swarms of B-29s razed about 32 square miles of Japan's four most important cities.
m

Boeing and the USAAF succeeded in jointly creating the first aircraft capable of carrying out the dreams of all the prophets of airpower, an aircraft capable of winning a war by utterly destroying the enemy's homeland. The relentless Boeing B-29 attacks over Japan in the spring of 1945 brought true airpower into existence. That August, the B-29 made ultimate airpower real by dropping the atomic bombs on Hiroshima and Nagasaki.

The B-29's road to ultimate airpower was long and difficult, and derived in part from Boeing's experience with the XB-15 and a series of follow-on designs. The Boeing B-29 Superfortress had its official beginning on February 5, 1940, when the Air Corps called for a "Hemisphere Defense Weapon," a super-bomber with a speed of 400 miles per hour, the ability to carry a ton of bombs for 5,333 miles, and a maximum bomb capacity of 16,000 pounds.

More than 1,000 Boeing B-29 Superfortresses would be ordered before the first flight of the prototype on September 21, 1942, with the talented Eddie Allen at the controls. A massive production effort was combined with an immense training program, and B-29s began rolling out of brand-new factories, first in Wichita, Kansas, and subsequently in Marietta, Georgia.

The Boeing B-29 Superfortress Enola Gay took off for Japan on the morning of August 6, 1945. With the primary target obscured, Col. Tibbets directed that the bomber head for the secondary target: Hiroshima.
m

Ironically, the Boeing B-29 Superfortresses were ineffective in their first combat efforts, for precision bombing from high altitudes was far different over Japan than over Europe. Operation from Chinese bases was difficult, and results were totally unsatisfactory. The Allied seizure of bases in the Marianas gave the B-29s another chance, as did the appointment of Major General Curtis E. LeMay to command the operation. LeMay made a decision to send the B-29s in low, at night, and loaded with incendiaries. His tactics worked, and Japan's cities were burned to the ground.

When the Japanese refused to surrender, despite their desperate situation on land, sea, and in the air, two atomic bombs were dropped to avoid the necessity of an Allied invasion of the home islands. The gamble with the B-29 had paid off, saving hundreds of thousands -- possibly millions -- of American and Japanese lives, and bringing World War II to a close.