How do polymer crystals work and why do they absorb so much water? 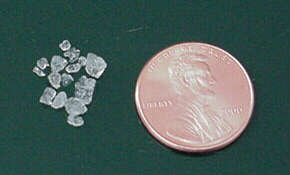 Construction workers, bicyclists and motorcyclists may be seen wearing cloth headbands or wearing a cloth collar around their neck. The crystals are sewn into a pouch in the cloth. The cloth item is then soaked in water for several hours. A tiny handful will swell up to many times it size and provide moist evaporative cooling for the wearer.

Florists also use polymer crystals as a dirt-free way to store water and to keep cut flowers fresh for a long time.

It takes about 45 minutes to hydrate the typical headband or collar. Refrigeration ahead of time is not necessary, but it does help extend the cooling time. The same polymer crystals can be rehydrated many times. The following picture shows how the same crystals appear (several hours later) after about an ounce of water was poured on the crystals:

Other uses of the crystals:

Why Is 137 the Most Magical Number?
Stephen Hawking: Our Own Stupidity Remains a Threat to Humanity
Stuff You Should Know Podcast Talks Big Bang With Neil deGrasse Tyson