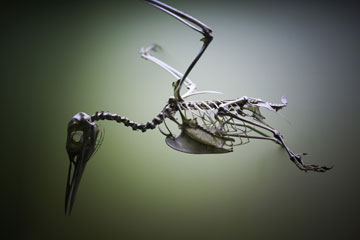 A duck walks into a convenience store, and the cashier says, "Hey buddy, I hear you birds are descended from the dinosaurs." The duck jumps up on the counter and regards the cashier irritably. "Nonsense," he quacks, "Dinosaurs descended from us." Then the duck attempts to purchase lip balm on credit.

The reptile and bird worlds are closely linked. Comparative anatomists as far back as the 16th century noted the similarities, and several key fossil finds have backed up those observations. Specimens such as the Archaeopteryx lithographica display both dinosaur and avian characteristics. As such, paleontologists championed the Archaeopteryx as the ancestor of all living birds.

The counter theory tells a different story. Researchers from Oregon State University have uncovered various physical inconsistencies between birds and dinosaurs and argue that birds appear in the fossil record before the dinosaurs from which they would have descended [source: Science Daily].

Paleontologists also point to moving thigh bones in theropod dinosaurs as a major flaw in the dinosaurs-to-birds theory. Birds require 20 times more oxygen than reptiles and boast fixed thigh bones to enable the proper lung function (that fixed positioning can help to stop birds' lungs from collapsing). These paleontologists and their discoveries ultimately paint a picture of the past in which birds and dinosaurs evolved separately from a common ancestor. Then, much later, some birds returned to the ground and evolved into our favorite flightless lizards like the tyrannosaur and velociraptor.

So is there a definite link between birds and dinosaurs? Certainly, but paleontologists disagree -- sometimes quite heatedly -- on exactly when and where the link exists: in the form of a common ancestor or in an evolutionary shift from dinosaur to bird or bird to dinosaur.

Explore the links on the next page for even more information about dinosaurs.