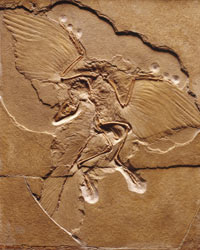 If you find a feather on the ground, you probably know in an instant that it belonged to a bird. This isn't just an oversimplification. There is a 100-percent chance that any real feather you find today came from a bird or from something made from a bird's feathers, like a hat plume, a fluffy boa or the inside of a down comforter. Of all the animals in the world, only birds have feathers, and without them, birds couldn't fly.

According to the fossil record, birds and their feathers have been on Earth since the Jurassic Period. Many paleontologists consider the oldest known bird to be Archaeopteryx lithographica, which lived about 150 million years ago. Whether Archaeopteryx could fly is up f­or debate, but the primitive bird definitely had feathers -- you can see their impressions surrounding its fossilized bones. Archaeopteryx also had a wishbone, just like today's birds, while displaying some physical features that were more like reptiles, like a set of teeth and a bony tail.

­Wh­ile it may seem logical that modern birds must have descended from their oldest known relative, there are some problems with this idea. A big one is that if you traveled 125 million years into the past, you may have seen lots of animals with feathers. They weren't birds, though -- they were dinosaurs. Since the late 1990s, paleontologists have found the fossils of numerous feathered dinosaurs, including species of Caudipteryx, Microraptor and Dromaeosauridae [source: Prum]. One is even a much smaller relative of Tyrannosaurus rex known as Dilong paradoxus [source: Roach]. Many of these specimens come from fossil beds in Liaoning Providence, China, where the proximity of lakes and active volcanoes made an ideal environment for preserving the impressions of feathers.

While these impressions make it clear that some dinosaurs had feathers, the reasons behind their downy coats are less obvious. We'll look at the prevailing theories about dinosaur feathers next, and we'll explore whether such fossil finds would make "Jurassic Park" look more like "The Hoboken Chicken Emergency." 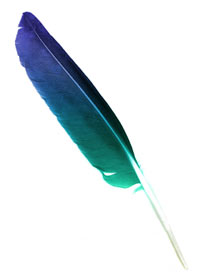