Is it worse to be near an explosion on land or in water? 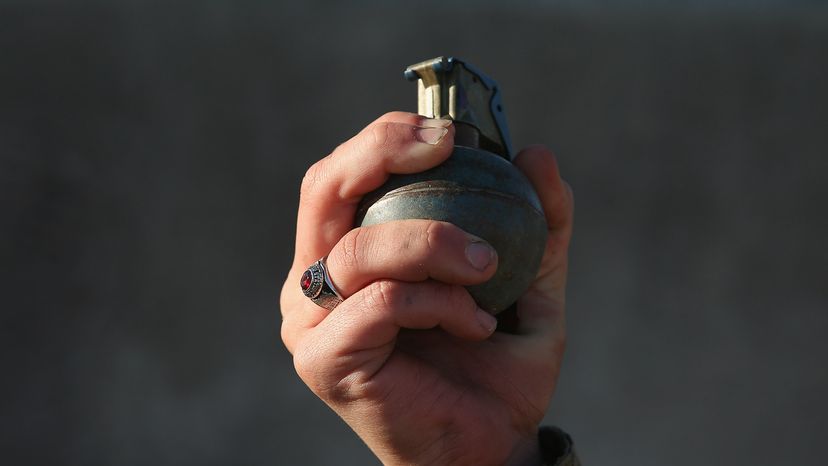 Where would you rather encounter a hand grenade? On land or underwater? Scott Olson/Getty Images

You're lying by the swimming pool, soaking up a few rays and enjoying a nice, cold beverage when your day takes a turn for the worse. Suddenly, you hear a metallic clang followed by a splash in the water. You glance to your left and see an unpinned hand grenade spinning to a stop beside your lounge chair. You turn to your right and see another explosive sinking to the bottom of the pool. In seconds, both will explode. That's just enough time to either dive into the pool or cower on the ground beside the chair. What do you do?

So much for your tan -- neither option is exactly a holiday. Either way you choose, a deadly explosive ­device will detonate in your immediate area. Is it worse to be near an explosion on land or in the water? Well, liquids are­ denser than gases, so maybe the water will cushion the explosion, you reason. It's also harder to run through water than it is to run through air. Won't water also slow down the explosion?

Or will the blast actu­ally be more destructive underwater? Y­ou've seen the effects of fishing with dynamite on television before, complete with images of fish floating dead to the surface by the dozens. Will that happen to you?

­So many questions -- yet so little time! Th­ose grenades are about to explode. Make your decision and read the next page to discover your fate.

Anatomy of an Underwater Explosion 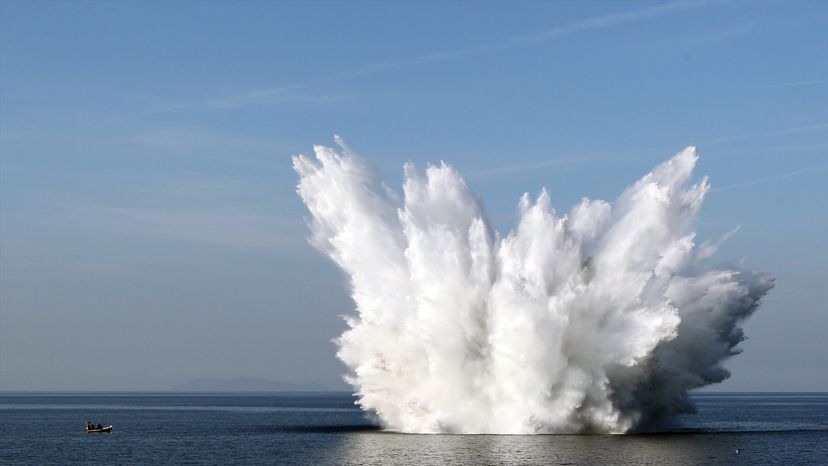 A World War II-era bomb of the US air force is detonated by the crew of French minesweeper Orion in Bastia on June 2, 2015. Pascal Pochard-Casabianca/AFP/Getty Images

One hand grenade is in the pool, the other is by your chair. Which blast is more dangerous? If you chose to jump in the pool rather than endure the explosion on land, we have some bad news for you: You made a disastrous decision. Assuming the blast from both hand grenades was identical in strength and that you were the same distance from either blast, the underwater explosion, also known as an UNDEX, would be far more dangerous.

Of course, the hand grenade by the side of the pool is no bundle of joy either. All explosives are little more than elements that burn or decompose at an incredible speed. This chemical (or, in some cases, nuclear) reaction produces a massive amount of heat and gas in a very short period. Explosive chemical reactions break down compounds into highly compressed gases, as well as heat resulting from compound molecules being blasted apart. The gases expand rapidly, and the heat speeds up individual gas particles to increase expansion speed even more.

This rapidly expanding gas, called a pressure wave, is the key to any explosive's destructive power. If the pressure wave is fast enough to break the sound barrier, it generates a powerful shock wave. A land explosion can burn skin, tear apart limbs and propel objects and shrapnel through the air.

When the pressure wave travels through the air and connects with a living organism, the organism's body reflects most of the force. This is because there's a difference in densities: The molecules in solid skin are closer together than the rapidly moving gas molecules. However, portions of your body contain gas, meaning the density is the same as the expanding gas in the pressure wave. The pressure wave hits the body and, while most of it is reflected, some of it manages to compress internal gases. As a result, the victim sustains primary blast injuries. These typically affect the lungs, ears and -- in rare cases -- intestines. These gassy chambers basically implode, rupturing and fragmenting tissue.

In an explosion surrounded by air, the atmosphere will compress and absorb some of the explosive energy. This decreases the lethal range of the explosion. Water, however, is often described as incompressible. Technically, it can compress, but it takes a massive amount of pressure to apply a small amount of compression. This means that in an underwater explosion, the surrounding water doesn't absorb the pressure like air does, but moves with it. An underwater explosion doesn't propel objects through the water nearly as far as a surface explosion throws shrapnel because of the drag water exerts on objects. However, an underwater explosion transmits pressure with greater intensity over a longer distance.

If you stood outside of shrapnel range for an exploding hand grenade, you'd likely remain unharmed. If you stood at the same range to an underwater explosion, the pressure wave would probably kill you [source: Landsberg]. When the wave reached your skin, it would pass through you. After all, little of its power would be reflected because your body's density is similar to that of the water. The wave would hit the air-filled pockets of your body and instantly compress the gases there, possibly resulting in blocked blood vessels, ruptured lungs, torn internal tissues and even brain hemorrhaging. Waves hitting the surface of the water or the bottom of the pool would bounce back, inflicting even more damage. Explore the links on the next page to learn more about explosions, the human body and how to survive other dangerous encounters.

The MythBusters are no strangers to lighting a few fuses to answer a nagging question or two. Watch them debunk myths about hand grenades and underwater explosions at the show's official Web site.

Robert Lamb "Is it worse to be near an explosion on land or in water?" 4 August 2008.
HowStuffWorks.com. <https://science.howstuffworks.com/explosion-land-water.htm> 25 June 2022
Print | Citation 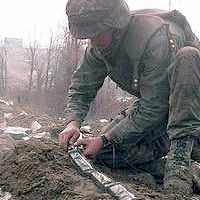 Up Next
How C-4 Works
Explore More 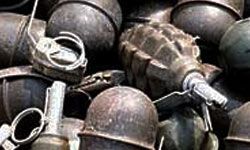