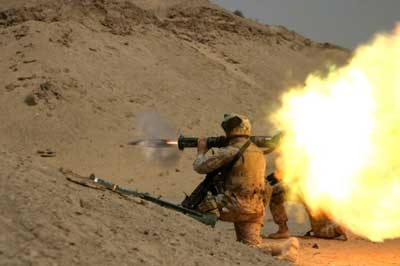 In November 2003, a missile struck an airplane operated by global shipment company DHL as it lifted off from a Baghdad airport. The missile wasn’t fired from another aircraft or a fixed launch site, but from a handheld rocket launcher operated by one or two individuals. A similar attack, carried out by al-Qaida terrorists, threatened an Israeli plane departing from a Kenya airport in late 2002.

Although no one was killed in either of these incidents, many experts believe that it is only a matter of time before a shoulder-fired missile brings down a commercial airliner, resulting in hundreds of civilian deaths. The threat of such a catastrophe prompted the Department of Homeland Security to conduct a three-year study to test the feasibility of installing missile defense systems, adapted from military applications, on all turbojet aircraft used in scheduled air service. One of the systems included in that study is Northrop Grumman’s GuardianTM Solution for Commercial Airplanes.

The Guardian Anti-missile system pod, placed on the underside of the airplane's nose.
Photo courtesy of Northrop Grumman

In this article, you’ll learn about the GuardianTM anti-missile system, as well as the specific type of weapon it is designed to foil. You’ll also learn how, in the absence of such systems, airplanes and airports can reduce their vulnerability to this particularly lethal type of attack.

Guardian is a technology designed by Northrop Grumman Corporation to detect and foil missile attacks launched against aircraft by terrorists located on the ground. In military lingo, such a technology would be called a countermeasure, and in fact, Northrop Grumman based the design of Guardian on its military countermeasure system, the Nemesis directional infrared countermeasures (NEMESIS DIRCM, officially known as the AN/AAQ-24 [V]). The NEMESIS system has been in production since 1997 and entered service in 2000. It currently protects about 350 aircraft of 33 types, from small, fixed-wing planes to helicopters.

Guardian would do the same for commercial airplanes, helping them to elude infrared (IR), or heat-seeking, missiles. Although IR missiles can be fired from many types of weapons, they are especially lethal when fired from a single-operator rocket launcher, also known as a Man-Portable Air Defense System (MANPADS). MANPADS can be fired from the ground and require no human intervention after the missile has been fired. They are easy to transport and just as easy to set up and take apart.

By some estimates, more than 700,000 MANPADS have been produced worldwide by a number of nations. Unfortunately, many thousands are now unaccounted for, with most of those appearing on the black market, where terrorists can buy them relatively inexpensively. The main targets for terrorists armed with MANPADS are airliners, which are particularly vulnerable as they take off or land. To date, terrorist-launched MANPADS have been responsible for as many as 1,000 civilian deaths, making it one of the biggest threats to commercial airliners.