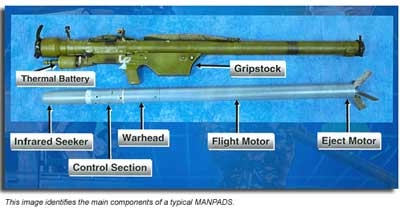 The parts that make up the man-portable air defense systems, or MANPADS
Photo courtesy of U.S. Department of State

To understand how the Guardian system works, it’s helpful to understand how missiles fired from Man-Portable Air Defense Systems work. If you read How Stinger Missiles Work, you’ll find great information about a specific MANPADS example. Here is a quick recap.

Missiles fired from Man-Portable Air Defense Systems are guided missiles, which consist of a warhead, engine, and guidance and control equipment. Because they are launched from the ground and intercept their targets in the air, MANPADS missiles fall into the surface-to-air category. They are much smaller than ballistic missiles, which look more like space rockets. Ballistic missiles travel great distances along an arching, parabolic path and are guided for only a portion of their trip. MANPADS missiles, on the other hand, fly much shorter distances and are guided for their entire flight.

The guidance system is one of the most important parts of any guided missile. There are many different ways to control the flight path of a projectile, but almost all modern missiles take advantage of homing guidance. Homing missiles come equipped with a seeker - an onboard antenna sensitive to a specific energy source. That energy source could be any part of the electromagnetic spectrum, but one of the most easily detectable forms of energy is infrared, or heat. An infrared seeker is able to lock on to the enormous heat produced by an aircraft’s engine and, with deadly accuracy, guide the missile to its target.

The Redeye missile was one of the first Man-Portable Air Defense Systems used in combat.
Photo courtesy of Redstone Arsenal Historical Information

The U.S. Army’s Redeye missile, first deployed in the 1950s, is a classic example of this type of weapon. Indeed, the Redeye missile was named for the infrared sensor carried in its nose. Designed for simple, reliable operation, the Redeye missile could be carried anywhere a soldier could take a rifle, could be made ready to fire in seconds and required little training to use. It was used for almost two decades until the Army developed newer, more sophisticated man-portable systems.

One of those systems was the Stinger missile, another American-made weapon still in use today. Two important Russian MANPADS models include the Strela and the Igla. The Stinger and the Igla have similar capabilities, both being able to engage targets head-on, from behind and from the side. Both systems also incorporate highly advanced infrared, ultraviolet seekers that make them even more difficult to elude. We’ll talk more about that in the next section.

There are three primary ways to defend against guided missile attacks. If the missile uses a radar-based seeker, which tracks reflected radio waves, it can be confused by chaff. Chaff refers to strips of metal foil or metal filings released by aircraft under attack. By reflecting incoming radio waves, chaff creates a false signal that the missile follows taking it off course.

If the missile uses an infrared seeker, like most MANPADS do, it will not respond to chaff. But it will respond to a decoy heat signal. Decoy heat signals are easily created by lighted flares, which an aircraft can release when it detects an incoming missile. The burning flares present multiple heat signals that less sophisticated missiles can’t discriminate. However, Stinger and Igla missiles are able to distinguish between flares and the target. That’s because the seekers in these missiles can detect two types of energy -- infrared and ultraviolet. Although the infrared signal of a jet is much stronger, its ultraviolet signal is present and detectable. By creating a unique signature of its target based on dual energy sources (longer-wavelength infrared and shorter-wavelength ultraviolet), Stinger and Igla missiles are much more difficult to foil.

To defend against these more sophisticated missiles, a laser-based system is required. Lasers can do one of two things -- it either destroys the electronics in the missile’s guidance or jams the seeker so it can no longer “see” its target. Jamming is actually more common in today’s anti-missile defense systems because their lasers don’t have to be as powerful to be effective. Northrop Grumman’s Guardian solution is a laser jammer, and in the next section, we’ll look at exactly how it foils attacks made by Man-Portable Air Defense Systems.