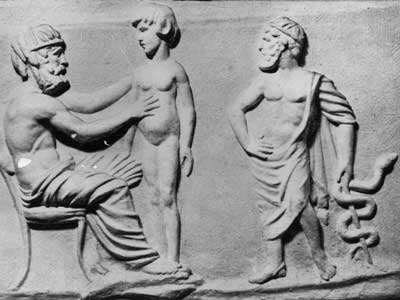 A cast taken from an ancient Greek intaglio gem depicts a physician examining a patient while Asclepius, the god of healing, stands nearby holding the symbol of medicine, a snake coiled round a staff.
Hulton Archive/­Getty Images

­It is the fourth century B.C. and Herophilus, the father of anato­my, raises his surgical blade to gleam in the Egyptian sun. All around him, physicians from throughout the Mediterranean crowd in to witness his incision, strain to see as he bends his instrument to the task ahead. Already, they have learned so much about the physiology of the eye, have plunged the mysteries of human viscera.

Once more, the master parts flesh, enters the bloody maze of arteries and muscle. With each incision, the body beneath writhes with agony, strains against the cords that bind him to the operating table -- for he is no mere cadaver, but a living, breathing test subject. Herophilus continues his examination, oblivious to the condemned prisoner's muffled screams. The scholars discuss the study of the exposed poroi or nerves, even as they spark with unimaginable torment.

­It was a time of great learning in the ancient world, and Alexandria was the very center of it. The Ptolemy family had established a museum or "house of muses" for the advancement of science and literature. The family's findings helped fill the legendary Library of Alexandria and, for a time, the city served as a redoubt against an ignorance-shadowed world. The ban against the dissection of cadavers was lifted.

For a period of approximately 50 years, even the tabooed practice of human vivisection became common practice. After all, scholars could learn only so much from a study of the dead. In an age when blood vessels were still thought to carry air, they needed to open living bodies to their scientific scrutiny. Why shouldn't the forsaken lives of the condemned benefit generations to come?

Herophilus allegedly dissected nearly 600 live prisoners, earning his place in medical history with his various discoveries. Yet, even at the time, many critics expressed unease about vivisection, regardless of the rewards. His writings were lost forever in A.D. 272, when the city's great library was gutted by fire.

As we stare back through the ages, Herophilus hardly stands as a distant flicker of moral quandary. Rather, history snakes with countless and unsettling examples of human experimentation.

­Modern society stands mere decades removed from some of the worst examples of unethical experimentation. Even today, medical science continues to advance on the backs of human test subjects.