Why Experiment on Humans? 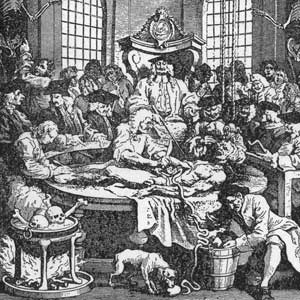 In this 1751 woodcut, the anatomical dissection of a convicted murderer takes place in the surgeon's hall. In the 18th century, only the bodies of executed criminals could legitimately be used for this purpose.
Hulton Archives/­Getty Images

­The issue of human experimentation generally comes down to a basic fact: When science deals directly with humans, you have to study humans -- eventually. It's that simple. Whether you're looking to heal ailments and injuries, build a safer automobile or design a deadlier weapon, you may need to test human thresholds for disease, stress and injury.

A few other options (and ethical obstacles) tend to present themselves before you take Herophilus' lead and start cutting into convicted felons. If your experiment absolutely demands the use of a human subject, you can always fall back on the dead variety. Even without function, you have form. The famed father of anatomy himself used them for much of his research.

To break new ground, medical pioneers often had to depend on the bodies of executed criminals or steal corpses from graves and gibbets. Body snatching became a growth industry in 19th century, as medical schools required fresh bodies for young surgeons to practice on. Today, researchers and students can more easily obtain access to legal medical cadavers.

Sometimes, scientists require a living subject -- a working model. In many cases, they turn to the rest of the animal kingdom. In the past century alone, chimps, rabbits and other animals have aided in everything from polio research and space exploration to cosmetics and bioweapons testing.

Moral and ethical dilemmas aside, there are two key problems with animal research. First, a rabbit can only provide behavioral and physiological feedback. Even the brightest primate can't fill out a Q&A. Second, you're working with a nonhuman species, making it difficult or impossible to study certain human-specific diseases, ailments and scenarios.

Self-experimentation has often proved a very successful (and foolhardy) means of scientific inquiry. Numerous scientists have purposely infected themselves with disease or parasites to get a firsthand take on the subject matter. Pierre and Marie Curie earned the 1903 Nobel Prize in physics for their radiation research, which involved taping hazardous radium salts to their skin.

Yet self-experimentation has its limits. Herophilus couldn't have performed his own vivisection, much less 600 separate procedures on himself. After all, an experiment is just one phase in the scientific method -- there's no sense in dying halfway through. Plus, how do you retain functionality and objectivity if you're suffering from the very plague you hope to cure?

That leaves human experimentation, and all the negative connotations that come with it.