Cheese is everywhere. There's a theory that it can make just about anything -- from sandwiches and hamburgers to pasta and salads -- taste better. It's a classic topping for crackers, and it's hard to imagine pizza without warm, gooey mozzarella. When something is kitschy, we might refer to it as "cheesy." When you get your photo taken, you "say cheese." Fans of the Green Bay Packers football team wear foam cheese wedges on their heads. 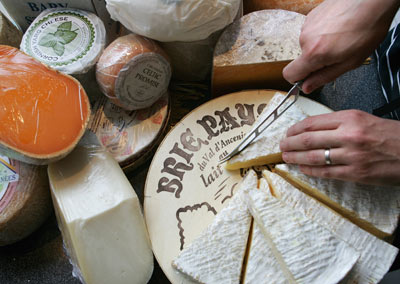 Cate Gillon/Getty Images
A worker at a cheese shop in London cuts a round of Brie.
See more pictures of classic snacks.

Americans love their cheese: In 2005, Americans consumed an average of 31.4 pounds of cheese per person. The Greeks consume the most per person per year -- 58.7 pounds [source: Wisconsin Milk Marketing Board] -- but the United States is the world leader in cheese production, with 4.3 million metric tons in 2005 [source: U.S. Dairy Export Council]. There are several laws governing cheese sale and production in the United States. For example, many cheeses can't be sold in the United States because the FDA requires all raw-milk cheeses (cheese made with unpasteurized milk) to be aged at least 60 days [source: FDA]. Raw milk can contain bacteria that causes food-borne illnesses. Aged cheeses like Parmigiano-Reggiano are too salty, acidic and dry to hold bacteria.

Visit the cheese section of any grocery store and you'll notice a dizzying variety of shapes, sizes, textures, flavors and styles of cheese. All of it has a few things in common, though. Cheese is basically an easily transportable and preservable form of milk (usually from cows, but also from goats, sheep and other animals). Milk, in its natural state, is more than 80 percent water. Once you remove the water and compress the remaining solids, you have cheese [source: Jenkins]. Along the way, there are lots of different things that cheesemakers can do to alter the flavor and appearance of the cheese.

But exactly how does this happen? Why do we make (and eat) cheese that's stinky and moldy? Are Velveeta and Cheez Whiz real cheese? And why are those Packers fans called "cheeseheads," anyway? In this article, we'll learn all about the different types of cheese, how cheese is made, and about its place in our history and culture.

There are lots of different types of cheese and no standard way of classifying them. Some cheeses also fall into more than one category. They can be classified by age, country of origin, fat content, dairy content, manufacturing methods, texture and special characteristics. Steven Jenkins, a renowned American cheese expert and member of the Confrérie des chevaliers du Taste Fromage (an elite society of cheese connoisseurs), suggests the following categories [source: Jenkins]:

Fresh cheeses are the most basic. They're uncooked, unaged and sometimes still contain whey (the liquid part of milk). They don't keep very long and therefore need to be eaten soon after they're made. This cheese category includes mozzarella, cottage cheese, ricotta, cream cheese, farmer cheese, mascarpone and queso fresco. Fresh cheese is characterized by its soft, creamy texture and mild taste. 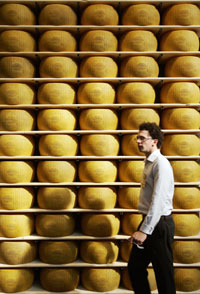 Soft-ripened cheeses are semisoft in texture and sometimes have a white, or "bloomy," rind. This is created with the application of molds (more on this later). Soft-ripened cheeses are usually a little more flavorful and buttery than fresh cheeses, but they're still very mild. Camembert and Brie are examples of this type of cheese.

Most varieties of "stinky" cheese, like Limburger, are washed-rind, or monastery cheese. These cheeses have reddish-orange rinds. The "stink" comes from being washed in a liquid, such as salted water, wine or beer, during the ripening phase. The washing encourages the growth of bacteria and mold, which gives the cheese a very strong smell and taste.

Some cheeses have rinds that form naturally, without the introduction of molds or bacteria. These natural-rind cheeses are usually aged and are heavier than other types of cheeses. Many of them are made from raw milk, and they include English Stilton and the French fromage de chèvre.

English Stilton is a blue-veined cheese. These cheeses resemble marble, with bluish-green veins crossing through the pale cheese. The veins are mold cultures, introduced during the cheesemaking process. Depending on the type of cheese, the mold may give it a very strong flavor. Maytag Blue, Gorgonzola and Roquefort are other examples of blue-veined cheese.

Processed cheese isn't technically a cheese but a byproduct of the cheesemaking process. It may be made with scraps of cheese, but processed cheese can also include whey, cream, water, dyes, gums and other ingredients. It has a long shelf life, melts easily and can be made in spreadable varieties. This type of cheese includes American cheese (although this name is also used for some American-made cheddars) as well as products like Cheez Whiz, Velveeta and spray cheese. However, not all processed cheese is American-made -- the French La Vache Qui Rit (Laughing Cow) is also processed.

Regardless of the source, milk is the main component in cheesemaking. In the next section, we'll look at how all of these cheeses are made.

All cheese starts with milk. In the United States, most cheese is made with pasteurized milk. Some cheese connoisseurs argue that raw-milk cheese tastes better, and some small dairies produce raw-milk cheese (although to be legal in the United States, the cheese has to be aged for 60 days). But in addition to being considered safer, using pasteurized milk to make cheese is also easier because its behavior is predictable.

Large cheesemakers get their milk in tanker trucks, which have to be spotlessly clean and keep the milk at about 42 degrees Fahrenheit (5.6 degrees Celsius). Small dairies may use milk from their own herds. Once the milk is collected, it is put into a huge container and warmed.

First, the milk must separate into curds (solid) and whey (liquid). To start this process, the lactose, or milk sugar, needs to become lactic acid. After warming the milk, cheesemakers add a starter culture that contains one or more types of bacteria, including Streptococcus thermophilus and Lactobacillus helveticus. These bacteria are also known as lactic acid bacteria (LAB) because they produce lactic acid as they metabolize. The specific mix of bacteria depends on the type of cheese being produced.

Once the acidity level in the milk rises, the casein (one of the proteins in milk; whey is the other) can curdle. This requires the addition of rennet, which is a group of enzymes extracted from the stomach lining of a young cow, sheep or goat. In the stomach, rennet allows the animal to digest its mother's milk. When added to milk, it makes the casein turn into curds.

After settling for up to two hours, the curdled milk has the appearance and texture of custard or pudding. The temperature of the cheese at this point depends on the type of cheese being made. Generally, higher temperatures produce firmer cheeses. Next, the curd is cut using a tool called a harp, which releases the whey. The size of the curds will determine the type of cheese -- soft cheeses come from large curds, while harder ones come from very fine curd. The whey is drained and used as an additive in processed foods and in animal feed.

The next steps in the cheesemaking process depend on the type of cheese. We'll look at the possibilities in the next section.

Once the cheese is condensed into curds and salted, there are still a few steps before it's ready to eat. All of them really depend on what the cheesemaker produces. Although the type of cheese became a factor with the temperature of the milk and the size of the curds, the differences become even greater in the final steps.

If the cheesemaker is producing cheddar (or a similar uncooked, pressed cheese), for example, he or she might cheddar the curds. In this process, the curds are stacked on top of each other, pressed together and then stacked again to expel the maximum amount of whey and dry them out. Then they're chopped fine, salted and pressed into molds.

Cooked, pressed cheeses come from curds that have been cooked and stirred to give them a soft, stringy texture. High temperatures result in firmer cheeses like Emmental, while low ones create the right texture for fontina. Mozzarella production ends after the cooking process. Blue-veined cheeses aren't cooked at all, because they need a looser texture for mold to grow.

Salt flavors the cheese and also keeps it from spoiling quickly. If the salt has not already been added to the curds, the cheese can be rubbed or washed with salt, or even floated in a briny "bath." All of these methods affect the flavor of the cheese in different ways -- cheeses like Parmigiano-Reggiano get a salt rub while washed-rind cheeses are washed with brine or other liquids.

Next, the cheese is usually packed into a mold. Some are pressed to remove more whey, while others are simply molded. The more a cheese is pressed, the denser its texture will be. Some cheeses are finished after this stage, but many go through a ripening or aging period.

Before this stage, cheeses that need ripening usually taste bland and rubbery. During ripening, the milk proteins in the cheese break down further and impart more taste. The two most important factors during ripening are temperature and humidity, so cheese is usually ripened in carefully controlled storage facilities. Soft cheeses need high humidity, and they ripen quickly. Hard cheeses need slightly lower humidity. The humidity keeps the cheese from getting too dry and allows it to ripen at the right pace. Many cheeses are regularly washed, brushed and turned while ripening.

During ripening, the starters that were used to begin the curdling process play a part again and influence the taste and appearance of the final cheese. Cheeses with holes are made with bacteria that eat lactic acid and give off bubbles of carbon dioxide. Blue-veined cheeses start with a culture that feeds on oxygen. In a process called needling, cheesemakers make holes in the cheese, which lets in oxygen to feed the bacteria that produces mold.

Soft-ripened cheeses like Brie are made with bacteria that makes them start ripening on the outside first. Mold is often sprayed on to the surface to encourage the growth of white, "bloomy" rinds.

According to legend, the first cheese was made when someone, probably in the Middle East, discovered that storing milk in a calf's stomach over a long journey made it separate into curds and whey. Cheese was found in an Egyptian tomb dating to 3200 B.C., and Homer mentioned it in "The Odyssey'" [source: Lambert]. It became popular as a way to preserve milk and keep it from spoiling in warm climates. Eventually, travelers brought cheese to Europe. During medieval times, cheese was perfected by monks in monasteries, who aged it in caves. Bacteria and molds that are now added by hand originally existed naturally or were accidentally introduced, creating new types of cheeses.

In Europe, laws regulate cheese and wine production. Name-controlled (or PDO, for protected designation of origin) cheeses are found in Italy, England, France, Switzerland and Spain. For example, cheese made in specific provinces in the Emilia-Romagna region of Italy -- with a very specific recipe and technique -- is the only kind that can legally be sold as Parmigiano-Reggiano. Unless you buy cheese with that name stamped on its side, you're not buying "real" Parmesan cheese. (What does that tell you about those green cans of pregrated Parmesan?)

American cheese has long been reviled, but today artisanal cheesemakers are gaining a following in the United States. The first cheese factory was built in 1850 in New York state, but as dairy farms sprung up in the Midwest, cheese production moved there [source: Lambert]. Today, Wisconsin is the biggest cheese-producing state, with 25.9 percent of the country's cheese production in 2006 [source: Wisconsin Milk Marketing Board].

10 Scientists Who Were Their Own Guinea Pigs
Could you grow meat from stem cells?
How Aerosol Cans Work