by Jonathan Atteberry
Prev NEXT
3 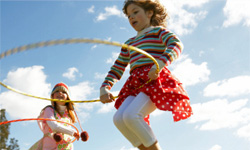 Yeah, but can you Hula-Hoop with your neck?
Digital Vision/Thinkstock

In the case of the Hula-Hoop, Wham-O toy company founders Richard Knerr and Arthur "Spud" Melin didn't have to do much inventing at all. In 1958, after hearing about Australian children playing with bamboo hoops during gym class, the two decided to recreate the bamboo hoops out of a then cutting-edge plastic called Marlex. The rest is history. Wham-O's hoop sparked a craze that swept the nation, with 40 million selling in the first year alone, and international orders pushed the total over 100 million in the following years [sources: Martin, Massachusetts Institute of Technology].

While the Wham-O founders had a great eye for new toys, their business sense wasn't quite as strong. The demand for Hula-Hoops dried up as quickly as it had grown, leaving Wham-O with warehouses full of hoops and no buyers. In the end, Knerr and Melin netted only $10,000 in profit from the whole experience. The experience wasn't a total loss, however. Only a few years later, they would put their knowledge of toys to good use when they marketed their next big invention, the Frisbee.