How has NASA improved TV technology? 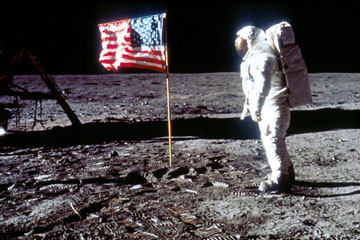 Astronaut Image Gallery The broadcast of the first moon landing in 1969 is an example of NASA's impact on the field of television. See more astronaut pictures.
NASA/Getty Images

On July 20, 1969, viewers witnessed one of the most compelling live news reports in the history of television: American astronauts disembarking Apollo 11 and taking their first steps on the surface of the moon. This broadcast was a product of over a decade of technological development in TV accelerated by the National Aeronautics and Space Administration (NASA). Let's look at how NASA has improved TV technology, starting with those early years.

World War II spurred significant advancements in television in the United States. When the Soviet Union launched the Sputnik satellite in 1957, though, the U.S. government was motivated to prove superiority over the Soviets in the space race. President Eisenhower signed into law the National Aeronautics and Space Act of 1958. Since then, people worldwide have enjoyed many technological advances, including enhancements to television, which can be attributed to NASA's scientific research or financial investments.

The earliest influence of NASA on television was extending the reach of TV broadcasts. One of the issues with wireless communication like TV is having a line of sight between sender and receiver. You're probably familiar with the line-of-sight challenge if you've ever had to locate that perfect place in your home for a TV or radio antenna, allowing you to pick up the most channels with the least interference. Obstacles on the ground and the curve of the Earth make line-of-sight difficult for more than a few miles. Powerful antennas placed on tall towers, buildings and mountains help send signals farther, but their distances are still limited.

When NASA launched its first satellite, Explorer I, in January 1958, the range of wireless communication changed forever. Explorer I's primary mission was to gather data about cosmic radiation during its twelve and a half orbits of Earth each day. When the satellite's battery ran out after four months, NASA lost contact with Explorer I. This, combined with the mixed results of successive Explorer satellite launches, set the stage for improving the quality and longevity of satellite communications for future missions [source: JPL].

As a result of the boom in satellite technology, NASA helped AT&T launch the first commercial communications satellite, the Telstar I, in 1962 [source: NASA]. Telstar I was used for the first transatlantic television transmission on July 11, 1962, between the U.S. and France [source: IEEE]. In the years that followed, NASA's Applications Technology Satellites Program (ATS) conducted communications experiments that ushered in the multibillion dollar commercial market we have in satellite services today [source: U.S. House].

So far, we've looked at how NASA accelerated the growth of television technology through the 1960s. Next, let's look at how the continued work of NASA has contributed to today's TV technology.

Space Technology in Your TV

The technology NASA developed for improving its own missions has resulted in commercial applications around the world. NASA calls these "spinoffs." Here are just a few of NASA's TV technology spinoffs:

Another NASA TV innovation resulted from the demands of a new, unexpected audience following the 1969 moon landing: TV viewers intrigued by outer space [source: Abramson]. NASA TV broadcasts immediately followed, carrying footage of subsequent Apollo missions. NASA television is publicly accessible and free to watch, and today it's an all-digital broadcast featuring four separate channels: Public, Media, Education and HD. Thanks to NASA TV, viewers have shared in NASA's triumphs and tragedies, from the first images captured from the surface of Mars to the loss of the Space Shuttle Challenger to the present. In 2009, NASA TV received the Philo T. Farnsworth Primetime Emmy Award in recognition of "engineering excellence' and to commemorate "the 40th anniversary of the technological innovations" that led to the first live TV broadcast from the moon [source: NASA].

It's hard to imagine how television would have developed without NASA. Would we have found a way to put satellites into space? It's difficult to know, but we can say for certain that NASA was the key to taking us around the world and beyond through our TV screens.

First Camera on the Moon

Television as we know it wouldn't exist without cameras to capture the audio and video and turn it into a signal to broadcast. The camera that captured the famous moon landing on July 20, 1969 was built by Westinghouse and cost NASA $453,000. Despite its historical significance and NASA's large investment, the Apollo 11 astronauts left the camera behind on the moon. [source: Abramson]

McDonald's French Fry Oil Anti-Frothing Agent May Cure Baldness
Toilets: The Past and Future of the Flush
Recreating the Glue Neanderthals Used to Make Weapons