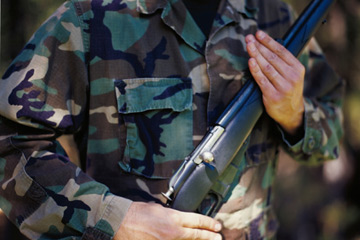 Are war and murder the same thing?
iStockphoto/Thinkstock

Hosea Biglow, the 19th century farmer in poet James Russell Lowell's book "The Biglow Papers," says that war and murder are one and the same. He feels the justifications for war are flimsy and unsubstantiated. Biglow sadly and cynically declares the true purpose of war to be based in greed and covetousness.

Perhaps Lowell's character had a point, but going by strict definitions, Biglow was wrong. Murder isn't simply the act of killing someone. It's a legal term that defines an unlawful killing. The adjective unlawful makes all the difference. One person shooting another on the streets may be murder, but on the battlefield it's condoned.

In a war in which the involved parties have all openly declared hostilities, killing enemy soldiers on the battlefield is legal. Since murder is illegal by definition, killing a soldier on the battlefield in a war can't be murder. A soldier who kills an enemy under the rules of war isn't a murderer.

It's important to remember the rules of war. There are conditions under which a soldier could be charged with murder during wartime. The Geneva Conventions are a famous set of rules that govern what is and isn't legal during war. The rules of war dictate that it's illegal to fire upon a surrendering, unarmed or otherwise helpless enemy, or to attack any building used as a hospital.

It may seem counterintuitive that war should have rules that everyone follows. Is there really a civilized way for us to kill each other? Why is it legal to end a person's life under one set of circumstances in war but illegal in a different scenario? If the reason for the war hasn't changed, and the two or more nations -- or parties within a nation -- are still in conflict, why is one form of killing allowed when others aren't? Is killing an armed enemy soldier on the battlefield somehow less wrong than using a white flag as a pretense for an ambush?

Philosophically, you could argue that murder and the act of killing during war are the same. In both cases, the life of one person ends at the hands of another. The victim isn't choosing to die. But because war is a state in which countries sanction the use of armies of human beings in armed conflict with one another, it doesn't fit the legal definition of murder.

For more on war, murder and related topics, take a look at the links on the next page.