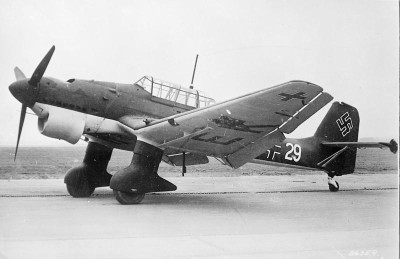 The first Junkers Ju 87 Stukas flew in 1935. Although the Stuka became the most famous as a dive bomber, it also achieved considerable success as a tank buster on the Eastern front. See more flight pictures.
none

Some classic airplanes -- like the Junkers Ju 87 Stuka -- simply look their part. This large, angular monoplane seemed absolutely ominous in flight or at rest. Of all the many attack planes of World War II, none so captured the terror of dive-bombing as did the dreaded Stuka.

The Stuka name derived from Sturzkampfflugzeug, the generic German word for dive-bomber. So famous was the Junkers Ju 87 that the term Stuka came to be identified with it in Western eyes.

The Stuka's first advocate was pilot Ernest Udet, who, with 62 victories in World War I, was the highest-scoring German ace to survive, and a national hero. Udet was a formidable aerobatic pilot (albeit a terrible technician) who pressed the Luftwaffe to adopt dive-bombing as a principal means of attack.

The first Junkers Ju 87 Stuka flew in the spring of 1935, and by 1939 many were ready to wreak havoc in Poland. There, the Stuka's horrific noise (given a special edge with screaming sirens) and terrifying accuracy exemplified the German Blitzkrieg.

The Stuka was equally effective in the Western campaigns, where it served as mobile artillery, moving through France in close coordination with the Panzer columns. An all-metal, gull-wing aircraft with fixed gear and lots of drag, the Stuka proved too slow and too ill-armed to fight over England and was withdrawn from service there.

The Stuka was very effective in the early years of the African campaigns, however, and through nearly all of the fighting with the Soviet Union in the East.

The Stuka was perfectly suited to the opening days of the war, when the Germans had air superiority. What is surprising, and in its way, noble, was that the Ju 87s and their crews fought on bravely when the tide of war had turned against them.