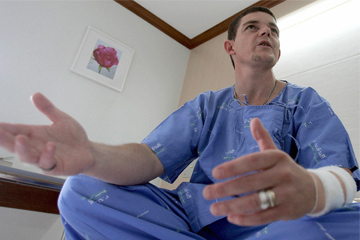 Neil Van Der Merwe of South Africa sits on a hospital bed during preparations for a gender reassignment operation at a hospital in Bangkok, Thailand.
Pornchai Kittiwongsakul/AFP/Getty Images

Gender transition is a process unique to each individual, and for those who do choose to affirm their gender with a medical transition, the path often consists of counseling and a diagnosis of gender dysphoria, hormone therapy and real-life experience before genital-changing surgeries are performed. Not all transgender people need — or want — these therapies; and, not all transgender people undergo surgery. Those who do choose to medically transition may select a number of procedures, or focus on just "top," "bottom" or cosmetic surgeries. The collection of procedures are also commonly called gender reassignment or — and the process begins long before the procedures do.

It begins with psychotherapy; in addition to providing counsel, mental health professionals assess a person's readiness for hormone therapy and surgery. To become a candidate for gender reassignment surgery, a person must first be diagnosed with gender dysphoria, as defined by the American Psychological Association's Diagnostic and Statistical Manual of Mental Disorders (DSM-5), a common language and standards protocol manual for the classification of mental disorders. Gender dysphoria was previously known as gender identity disorder (GID) and broken into a handful of classifications (such as childhood and adulthood) in the DSM-4. The revision was made not only to help ensure access to care while attempting to reduce the stigma associated with gender identity struggles, but it also removed the concomitance between transgender feelings and mental illness.

Having persistent feelings — for at least six months — that a person's birth sex doesn't align with his or her gender identity isn't considered a behavioral health issue. To be diagnosed with gender dysphoria, adults and adolescents must also exhibit at least two other conditions, including [source: APA]:

The desire for gender change cannot be a symptom of another disorder or a chromosomal abnormality. Additionally, these gender identity issues must cause distress, personally, socially, professionally or in any other manner [source: APA].

After counseling, evaluation and diagnosis, patients don't immediately schedule a vaginectomy (removal of the vagina), or penectomy (removal of the penis). Those who choose gender affirmation surgery will need letters of recommendation from counselors, psychiatrists, psychologists, sexologists and/or therapists prior to major gender reconstructive surgery.

Doctors normally recommend hormone therapy to alter secondary sex characteristics to the desired gender before surgery. Other than surgeries to reconstruct internal and external genitalia (and not counting anything considered a cosmetic procedure), most physical changes are managed with hormone therapy prescribed by an endocrinologist to suppress certain characteristics (such as distribution of body hair) or enhance certain others (such as breast growth). Hormone therapy may continue for a few years (it takes at least two years to achieve maximum results), and may be concurrent with what's known as the Real-Life Experience (RLE), a year dedicated to living openly as one's desired gender, and intended to help adjust — socially, physically and emotionally — to making these significant changes in gender expression [source: WPATH].