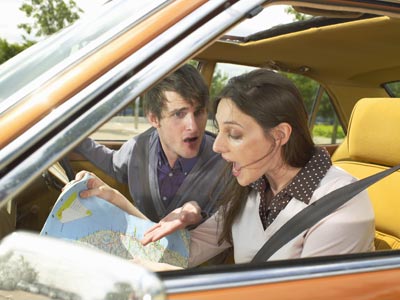 This couple is having a friendly discussion about which gender is more likely to stop and get directions. See more pictures of emotions.
Jim Naughten/Stone+/Getty Images

We like to think that men and women are fundamentally the same, excepting their reproductive organs. We all want the same rights and opportunities, and for some things, such as women's suffrage, it was a long, hard fight to achieve equal footing. As a result, we're often appalled at stereotypical suggestions that the sexes might be different. Witness the reaction to the Barbie doll who said "Math class is tough!" in 1992. In 2005, there was controversy surrounding Harvard president Lawrence Summers when he suggested there were innate reasons for why women did not perform as well as men on tests of math and science. Men, on the other hand, have staged massive protests over any silver screen depiction that paints them as merely beer-swilling, football-watching couch potatoes with the vocabulary of cavemen.

OK, so we invented that last example, but just because we can't track down a concrete example of such a protest doesn't mean that men aren't the tiniest bit irked. Still, we do seem to realize that as much as we'd like everything to be equal between men and women, there are differences in how we go about things. The sales of glossy magazines that promise to teach you how to work with someone of the opposite gender as well as self-help books along the lines of "Men are from Mars, Women are from Venus" are proof that we need a little help understanding what's going on inside the heads of men and women.

As it turns out, it may be better to turn to neuroscience rather than to Cosmopolitan magazine to figure out what's going on inside that guy's brain. Research indicates that men and women do in fact have different structures and wiring in the brain, and men and women may also use their brains differently. In some cases, this may explain some of the stereotypes that we may not like to acknowledge about the genders. For example, men do score better at tasks that involve orienting objects in space, while women do better at language tests [source: Kolata]. From there, it's but a quick jump to the conclusions that men are better at reading maps and women talk too much.

It's these kinds of stereotypes that make some people nervous about the findings on the male and female brain -- what kinds of implications would this have for our world? Would women immediately be banned from math classes and would men be forced to become engineers? Before we start jumping to conclusions, go to the next page and we'll take a look at just what sorts of brain differences we're dealing with.