You can't believe the words that have just come out of your mouth. You certainly didn't mean to insult the woman in line ahead of you, but it's too late now. What business is it of yours how many chicken nuggets she orders? She's staring at you angrily. You feel a sudden jolt as your heart rate increases. You have a coppery taste in your mouth, and your cheeks begin to feel warm. You, my friend, are embarrassed, and you're blushing because of it.

Blushing and embarrassment go hand in hand. Feeling flushed is such a natural response to sudden self-consciousness that if it weren't part of an emotionally crippling experience, it could almost be overlooked. But blushing is unique, which is why scientists want to know more about blushing. While the psychology of blushing remains elusive, we do understand the physical process involved. Here's how it works.

Blushing from embarrassment is governed by the same system that activates your fight-or-flight response: the sympathetic nervous system. This system is involuntary, meaning you don't actually have to think to carry out the processes. In contrast, moving your arm is a voluntary action; You have to think about it, no matter how fleeting the thought is. This is good, because if moving your arm was involuntary, people would end up buying a lot of stuff they don't want at auctions.

When you're embarrassed, your body releases adrenaline. This hormone acts as a natural stimulant and has an array of effects on your body that are all part of the fight-or-flight response. Adrenaline speeds up your breathing and heart rate to prepare you to run from danger. It causes your pupils to grow bigger to allow you to take in as much visual information as possible. It slows down your digestive process so that the energy can be redirected to your muscles. All of these effects account for the jolt you feel when you find yourself embarrassed.

Adrenaline also causes your blood vessels to dilate (called vasodilation), in order to improve blood flow and oxygen delivery. This is the case with blushing. The veins in your face respond to a signal from the chemical transmitter adenylyl cyclase, which tells the veins to allow the adrenaline to do its magic. As a result, the veins in your face dilate, allowing more blood to flow through them than usual, creating the reddened appearance that tells others you're embarrassed. In other words, adrenaline causes more local blood flow in your cheeks.

­­This sounds reasonable enough, but it's interesting to note that this is an unusual response from your veins. Other types of blood vessels are responsive to adrenaline, but veins generally aren't. In other regions of your body, veins don't do much when adrenaline is released; the hormone has little or no effect on them.

Blushing from embarrassment is a unique phenomenon. There are other means by which our cheeks become flushed: Drinking alcohol or becoming sexually aroused can cause us to blush, but only being embarrassed causes the type of blushing that is triggered by adrenaline.

Some people opt to undergo surgery to limit their blushing response. Erythrophobia is the fear of blushing and it can be enough that it could lead to a person choosing to have the tiny nerves at his or her spine, which control blushing, snipped. This surgery -- called endothoracic sympathectomy -- has been shown to limit blushing.

­Blushing is part of a powerful experience, but why have we developed this response to being embarrassed? Science hasn't been able to answer that question definitively, but there are some interesting theories about the reasons for blushing. Read about those on the next page. 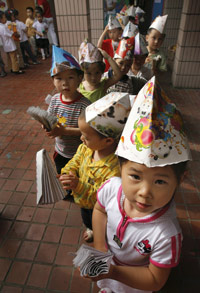 Embarrassment and the propensity to blush appear to develop around kindergarten age -- as these children in Nanjing, China, are discovering -- the time when we begin to grow conscious of others' feeling and thoughts.
Yang Xi/ChinaFotoPress/Getty Images

If you examine the phenomenon of blushing objectively, it appears a bit strange. What possible purpose could there be for more blood to flow through your cheeks when you feel embarrassed? Blushing has been determined to be universal among, as well as exclusive to, humans. Why would we develop a specific process that physically displays our embarrassment? Where did blushing come from? These are the questions that researchers are trying to answer.

Ray Crozier is a psychology professor at University of East Anglia in the United Kingdom. He's concluded that blushing evolved as a means of enforcing the social codes to which we humans must adhere for our societies to function in a friendly manner. By blushing when we're embarrassed, we are showing others that we recognize we've just misstepped socially, and that we're paying the price for it. Others who see us blushing after an awkward situation understand from experience the unpleasant feelings we're undergoing at that moment, and blushing may serve as a nonverbal, physical apology for our mistake.

Crozier tells the BBC that embarrassment displays emotional intelligence. "A prerequisite for embarrassment is to be able to feel how others feel -- you have to be empathetic, intelligent to the social situation" [source: BBC].

This empathy and social intelligence appears to develop in humans at an early age, around the time we enter school and we begin to engage in social situations with others . By studying the development of this social intelligence, psychologists have found that blushing from embarrassment develops alongside our consciousness of others. This lends further support to the notion that blushing has a purely social basis.

If the phi­losopher Thomas Hobbes was correct in his description of early societies as being "nasty, brutish and short" [source: Hobbes], then blushing may have developed as a means for displaying genuine regret over an insult to someone else. Since we humans are animals, too, a glance at our neighbors on the Tree of Life shows us that insults can lead to violence. As a result, animals have developed ways of displaying apologetic signs to show others they're sorry for what they've done.

Think about your dog rolling over after being caught digging in the yard. Exposing his or her belly to you shows you the dog is not challenging your anger at the situation -- it's a demonstration of contrition. For most people, it's pretty difficult to continue to feel anger toward the dog once he or she has rolled over. So blushing could be a way humans show their own contrition for bad social form.

Another interpretation suggests that blushing is the opposite of contrition; it's the appearance of rage. This explanation posits that blushing is the result of one aspect of your personality coming under assault. The NPA theory of personality (Narcissism, Perfectionism, Aggression) says that three components form the basis of all personalities. These components can occur in varying degrees to form a variety of different personality types. The narcissistic (N) aspect is based on a quest for glory and recognition among one's peers. When this quest is derailed publicly -- say through an embarrassing situation -- we experience the surge of adrenaline and the ensuing blush.

Regardless of what proves to be the ultimate explanation for why we blush, people seem to have developed an aptitude for forgiveness alongside their physical response to embarrassment -- if we hadn't, there'd be no reason for blushing. So the next time you suffer an awkward situation of your own making and feel your cheeks grow warm, just remember -- this, too, shall pass.

For more information on blushing and other related topics, head to the next page.