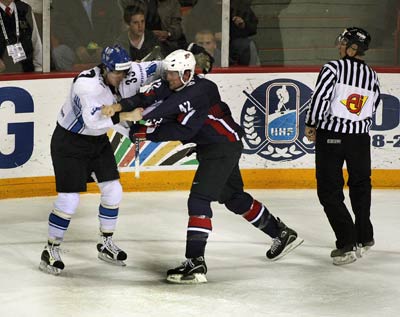 he 1­976 film "Network" is famous for the line "I'm as mad as hell, and I'm not going to take this anymore!" The fictional news anchor who utters the line becomes a celebrity, with the movie tracking how his angry diatribes result in high ratings. We still love to watch people get angry, from John McEnroe slamming down his tennis racket during a match to political candidates who utter expletives when they don't know the microphone is still on.

­We can tune into anger on every channel, from trash-talking wrestlers to venting stand-up comedians. We check out the chair throwing on "The Jerry Springer Show," and when we can't get enough from television, we'll turn to YouTube to see clips of celebrities acting out against the paparazzi.

While we may help these displays of anger to garner ratings and sell tabloids, we're much more hesitant to look at anger in our own lives. Anger is an emotion that encompasses everything from mild irritation to intense rage. We may think of anger as a negative emotion, one that gets us all worked up and causes us to say things we don't mean. Sure, we're annoyed, but hasn't everyone been told, "Don't get bent out of shape?" This seems to imply that anger is an unnatural distortion of who you are.

That's not true, though. Anger is a natural emotion that alerts us when something has violated the natural order of how we think things should go. This natural order may be societal; for example, when a shopper has 20 items in a 10-items-or-fewer line, this may make us angry because it's a violation of a clearly defined rule. But it can also show us that things are not happening the way that we as individuals expect them to go.

­The bodily effects of anger are meant to motivate us to take charge and restore the balance of right and wrong. But for this to occur, you have to get angry for the right reason and express your anger appropriately. As the images on our TV screens and monitors show us, this is a fine line to walk.

So how do we decide what triggers are justified? And then what happens -- does your blood really boil? What's the best way to let someone know you're angry that doesn't result in a bill for physical damage? On the next page, we'll take a look at what makes us angry.