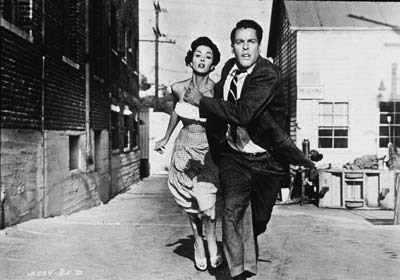 Capgras syndrome is reminiscent of the plot of "Invasion of the Body Snatchers," directed by Don Siegel, 1956. The film tells the story of a doctor who returns to his small town to discover that some of his neighbors have been replaced by aliens. See more pictures of mental disorders.
Photo by Allied Artists/Getty Images

Your father comes in the door and you go to greet him. Suddenly, you stop. Why, this man isn't your father at all. He looks like your father, but no, you decide, that definitely isn't him. He's been replaced by an impostor!

Capgras syndrome is what's known as a delusional misidentification. It's the opposite of déjà vu. People with Capgras syndrome think that their spouse, family members or even their pets have been replaced with doubles. Imagine how disconcerting it would be to have someone who looks like a loved one sit down with you and know intimate details about your life, even though you're sure that this person is a trickster.

Capgras syndrome used to be considered very rare, but medical professionals are beginning to think that perhaps it isn't so rare after all. The more doctors that know about it, the more people they find who have it. Capgras was first described by two French doctors, Joseph Capgras, for whom the syndrome is named, and Jean Reboul-Lachaux. Their patient, Madame M., was convinced that her family and neighbors had all been replaced by lookalikes. She said she'd had 80 husbands -- one imposter would simply leave to make room for a new one.

Capgras syndrome isn't the same thing as face blindness, or prosopagnosia. People with prosopagnosia can see a face for the hundredth time and still not know who it is. You can walk right by your best friend and not recognize her even when she says hello (For a more in-depth look at face blindness, check out "Can face blindness explain why that person at work never says hi to me?"). People with prosopagnosia, however, show changes in their skin conductance when shown a picture of someone they know. Part of their brain recognizes this person emotionally, even if consciously they don't know who it is.

People with Capgras syndrome can perceive faces, and recognize that they look familiar, but they don't connect that face with the actual feeling of familiarity. That woman looks like your wife, but you don't feel that she really is your wife. You don't have the feelings you should have when you look at this person with your wife's face. Their skin conductance stays the same as it would if they were looking at a total stranger. It's a problem of disconnection. So what's going on?

Delusions are different from hallucinations. A hallucination is something that affects your senses - you see or hear or smell things that aren't real. Delusions just have to do with a person's thoughts -- a delusional person has some thoughts and beliefs that aren't true. 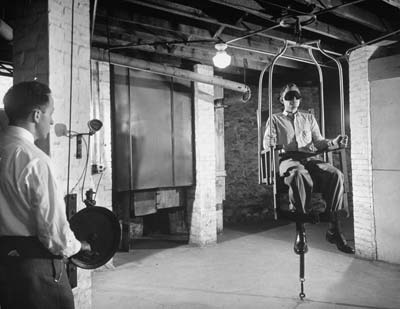 Many people with Capgras syndrome also have psychotic disorders. Doctors used to think that a normal patient would be dizzy after spun around in a chair, but a psychotic would not.
Photo by Herbert Gehr//Time Life Pictures/Getty Images

There are a few theories as to how Capgras syndrome works, some of them likelier than others. The psychoanalytical view is that perhaps the syndrome is a result of an Oedipus or Electra complex -- sexual desire for one parent, sexual jealousy for the other. People with the syndrome must be trying to resolve their guilt about these circumstances by identifying their parent as a parental look-alike. Some psychodynamic theories propose that Capgras syndrome has to do with repressed feelings. The psychodynamic approach, however, has been mostly discredited.

Many researchers think that Capgras syndrome is actually the result of something wrong with the brain, an organic cause. They look for lesions on the brain, signs of atrophy and other cerebral dysfunction. Although Capgras syndrome is usually seen in people who have psychotic disorders, more than a third of Capgras patients have signs of head trauma [source: Hirstein and Ramachandran]. Many Capgras patients also have other organic conditions, like epilepsy or Alzheimer's.

Still more doctors and researchers combine the idea of both a physical and a cognitive cause. There's something wrong with the brain, but why and how is Capgras syndrome occurring because of it? Maybe the organic cause leads to feelings of disconnectedness that lead to Capgras syndrome. Maybe it's too tough for people with a brain lesion to update memories when they see a person and the person looks slightly different. Your body is having a strange experience and your brain scrambles for a way to explain it.

Somewhere, the brain isn't communicating when it should be. This breakdown of communication might be happening between the part of the brain that processes the visual information for faces and the part that controls the limbic system's emotional response.

The argument seems to come down to whether Capgras syndrome is a problem of perception or of some other process, like memory. Hirstein and Ramachandran proposed that Capgras syndrome is a problem of "memory management." They give this example: Think of a computer. You make a new file and save it. When you want that information, you open the old file, add to it, save and close it again. Perhaps people with Capgras keep creating new files instead of accessing the old one, so that when you leave the room and re-enter, you are a new person, a person who looks like the one who left, but slightly different -- maybe your ears look bigger, or your hair a different hue. There's still a lot that science doesn't know about the human memory.

Some studies have also shown blind people with Capgras syndrome -- their delusion extends to the voice of a person, thinking that the voice is a voice of an impostor, instead of the face, so perhaps it isn't a face-processing problem at all. Other studies have shown people who were convinced by looking at a person that that person was an impostor, but they recognized the person's voice on the phone.

Some reports claim that people with Capgras syndrome tend toward violence. In one case, a man who thought a robot had replaced his father decapitated his father to look for evidence of his robot insides.

Capgras syndrome is classified as a delusional misidentification syndrome, known as DMS or DMI. These delusions are monothematic, which means that they center around one idea and make the world a very strange place for the people who have them, as they see everyone in disguise or perhaps don't even recognize their own bodies.

Named after a quick-change artist, Leopoldo Frégoli, the Frégoli delusion or Frégoli syndrome leads people to believe that the people around them are actually other people in disguise. For example, you see your doctor and think that it's actually your ex-girlfriend disguised as your doctor. One patient was convinced that two famous actresses put on the guise of her nurses and acquaintances in order to pester her [source: Edelstyn]. People with Frégoli delusion think that the people around them are capable of changing their appearance, dress and gender in a matter of moments, with only nearly imperceptible clues to their real identity.

Cotard's syndrome or Cotard's delusion describes the belief that one is missing organs, body parts or has become emotionally dead. Some people with Cotard's think that they no longer exist because they don't feel anything. Cotard's usually occurs in tandem with psychoses like schizophrenia and bipolar disorder. Patients' complaints run from "My heart doesn't beat" to "I don't have muscles" [source: Baeza]. Someone with Cotard's might think that his brain is rotting, that he's missing some of his insides or that he's "melted away" [source: Christensen]. They think they're the walking dead.

People with intermetamorphosis think that familiar people in their lives have switched identities, both physically and psychologically. While Fregoli syndrome involves just a physical transformation, intermetamorphosis includes the self. You might, for instance, decide that your father is really your brother, and every time you see your father, you see him as having the physical and psychological attributes of your brother.

Déjà vu isn't a delusional misidentification syndrome, but it's just as disconcerting. Déjà vu happens to a lot of us. You see something and immediately feel like it's something you've seen before. Or someone says something and you look around and the comment, the environment, everything -- you could swear it's already happened. But some people have chronic déjà vu. They remember things that never happened, like already watching the news, going to a friend's funeral or meeting someone for the first time. For them, nothing is new. One man said he wouldn't go to a doctor to find out what was wrong because he'd already been. Only, he hadn't [source: Ottawa Citizen]. (For a more in-depth look at déjà vu, check out How Déjà Vu Works).

For more information on Capgras syndrome, the brain and related topics, check out the links on the next page.

Some have argued that lycanthropy, or the belief that one is a werewolf, might be a form of delusional misidentification.

Do you have to be intelligent to be evil?
Try These 5 Daily Habits to Improve Your Life This Year
Now We're Stressed Out? History Shows It's the Oldest Emotion