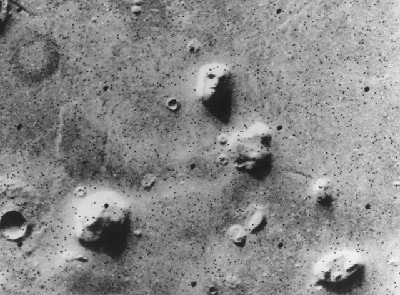 We earthlings have always been fascinated with the idea of finding life on other planets, and we've been captivated particularly with the possibility that life exists on one of our closest celestial neighbors -- Mars. Books, television shows and movies have all arrived at their own interpretations of what Martians might look like, from H.G. Wells' tentacled, squidlike aliens in "The War of the Worlds," to Looney Tunes' Roman helmet- and skirt-wearing M­arvin the Martian. In response to all of this postulating about life on Mars, scientists would explain that the atmosphere on the red planet couldn't support life as we know it.

Then in 1976, NASA's Viking 1 spacecraft was scouting out a potential Mars landing site for its sister spacecraft, Viking 2, when it came across something unexpected. While the craft was snapping pictures of a region of the planet called Cydonia, Viking 1 captured what looked like an enormous human face staring up at it. The "face" measured nearly two miles across and had what looked like deep-set eyes and a clearly delineated nose and mouth.

The tabloids, television shows and movie studios were quick to jump on the image, calling it real evidence of life on Mars. Writer and conspiracy theorist Richard Hoagland was one of the biggest proponents of the face on Mars idea. He claimed the face was an artifact of an ancient alien city, built by an intelligent Martian race.

Despite the apparent clarity of the face, NASA was quick to explain away the image as nothing more than an optical illusion. Shadows caused by the angle of the sun were merely creating the illusion of eyes, a nose and mouth across a natural formation, according to scientists.

True believers were equally quick to fire back: NASA was trying to cover up the evidence of life on Mars. It was a conspiracy. Find out the truth behind the face on the next page. 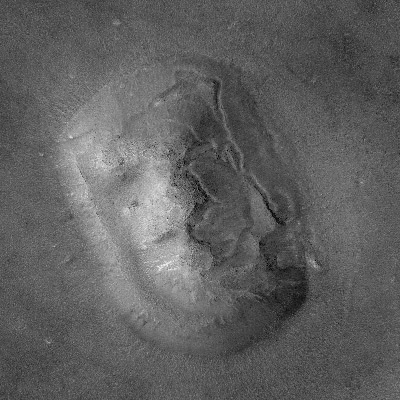 To learn more about other Martian mysteries and space conspiracies, investigate the links on the next page.

Earth: A Primer on the Third Rock From the Sun
White Dwarfs Can Shred Planets to Pieces
Has the 'Twisted' Mystery of Fast Radio Bursts Been Solved?