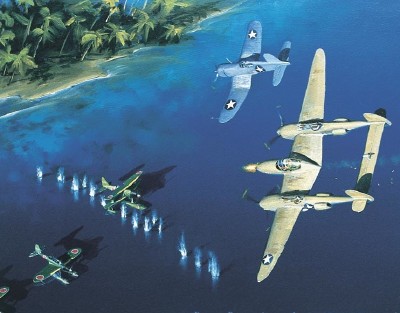 As the Lockheed P-38 Lightning evolved, it acquired self-sealing fuel tanks, and tail refinements for improved flight manners. Engines were routinely uprated, and the plane's under-wing-armament capability was increased.
h

The big Lockheed P-38 Lightning had its greatest successes in the Pacific Theater, where the two leading aces, Majors Richard I. Bong and Thomas B. McGuire, scored 40 and 38 victories, respectively, using only the Lightning. The Lightning was also the only plane capable of carrying out the extraordinary 800-mile mission that climaxed with the shoot-down of the Mitsubishi "Betty" carrying Admiral Isoroku Yamamoto on April 18, 1943.

Not as maneuverable as the Japanese fighters, the Lockheed P-38 Lightnings used dive and zoom tactics and their formidable center-line firepower of four .50-inch machine guns and a single 20-mm cannon to gain victories. It gave its pilots confidence on the daily long-distance flights over water, for if one engine was lost to combat or accident, the Lightning was able to limp home on the other.

The Lockheed P-38 Lightning was less at home in Europe, where its large size made it less maneuverable than the German fighters it faced. Further, its Allison engines didn't operate as well at the high altitudes and cold temperatures of the European Theater. It became a workhorse nonetheless, doing duty in bomber escort, reconnaissance, and bombing, carrying as much as 4000 pounds of bombs in the latter role. One version of the P-38 was modified with a "droop-snoot" and carried a bombardier and either a Norden bombsight or a radar set.

Only one U.S. fighter that was in production prewar was still being made at war's end: the Lockheed P-38 Lightning.
m

Curiously, Lockheed did not have much luck in creating advanced versions of the Lightning. The more powerful XP-49 and XP-58 took too long to mature, and neither was successful. It really ­didn't matter, for the Lockheed P-38 Lightning was capable of doing all that was required of it.