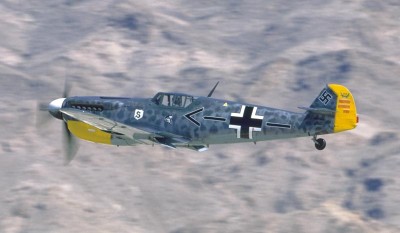 The Messerschmitt Bf 109 was designed on the principle that later defined muscle cars: small frame, enormous powerplant. The formula worked for this, perhaps the finest of all World War II fighter planes.
a

The Messerschmitt Bf 109 is one of the few fighters ever to be developed from a light-plane design. Willy Messerschmitt's angular little fighter was built in greater numbers than any other fighter plane, the total reaching 33,000.

The Messerschmitt Bf 109 also shot down more Allied planes than any other aircraft, and stayed in service longer than most, having entered combat in the Spanish Civil War (1936-39), fighting through World War II, and then going to war again in 1947, this time for the newly emerging state of Israel.

The great success and longevity of the Messerschmitt Bf 109 can be attributed to the simple directness of its design. In 1934, Messerschmitt engineers sought to place the biggest possible engine in the smallest possible airframe, and make that airframe easy to produce and repair. They succeeded admirably on all counts. The first flight, in September 1935, was made with an imported Rolls-Royce Kestrel engine of 695 horsepower.

Successive design changes to the Messerschmitt Bf 109 led to an increasingly streamlined aircraft. The one seen here is a Bf 109F, which appeared not long after the 1940 Battle of Britain.
n

Over the years, more than 100 variants of the basic design were created, including modifications introduced on Spanish and Czech production lines after the war. Larger and larger engines were installed, along with hundreds of pounds of additional equipment, and the tough little airframe took it. Examples from the final German operational version, the Bf 109K series, had a 2,000-horsepower engine and a top speed of 450 miles per hour -- not bad for a design begun in 1934.

Throughout its career, the Bf 109 was pitted against new and powerful adversaries, notably upgraded British Spitfires and the North American P-51 Mustang. In the hands of a capable pilot, the "Me 109" as it was most often called, inevitably held its own. Tricky to take off and land, and not the best gun platform, the Messerschmitt nevertheless remained a formidable adversary until the last day of the war.

Armament: One 30-mm MK 108 (or 20-mm MG 151) cannon firing through the propeller shaft; two 13-mm MG 131 machine guns in cowling; additional cannon could be carried in pods under the wing