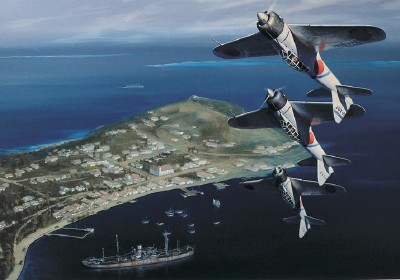 The Mitsubishi A6M Zero was a true symbol of Imperial Japan even more than the Spitfire was a symbol of Great Britain. The delicate lines of the Reisen, as it was known in Japan, masked a long-range, hard-hitting capability, just as the delicate manners of Japanese diplomats posted to Washington had masked their country's war aims.

The West had long been dismissive of Japan's potential for air warfare, comfortably and stupidly assuming that Japanese aircraft were merely inferior copies of Western designs, and that Japanese pilots were unable to successfully engage in dogfights. This attitude prevailed despite the demonstrated competence of the Japanese Army and naval air forces in battles with both China and the Soviet Union, and despite the very specific warnings of no less an authority than Claire Chennault, who would soon lead the American volunteer Flying Tigers in China.

The overwhelming successes of the Mitsubishi A6M Zero during the first six months of the war stunned Western observers, who now catapulted the Zero to the ranks of a super-plane, flown by super-pilots. This was not too much of an exaggeration in 1942, for the Zero was indeed superior to every fighter it faced, land-based or carrier-borne, and the Japanese Navy's elite force of experienced pilots was equal to or better than any in the world.

In time, the very design features Jiro Horikoshi had used to achieve the required performance -- light weight, minimum armor, non-self-sealing tanks -- would allow opposing American fighters to gain the upper hand. Continually updated with new equipment, the Zero was kept in production long after it was obsolete, with 10,499 being built.

By 1943, the performance of the Zero and the quality of its pilots were on irreversible downward spirals. Particularly damaging was that Japan's experienced pilots died in great numbers relatively early in the war. Conversely, American aircraft and pilots continually improved. The Mitsubishi A6M Zero's final role was a sad one: a kamikaze sacrifice of plane and pilot.