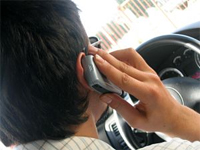 When we're on a cell phone and driving, our attention is divided. Déjà vu may work the same way.
Photo courtesy Dragan Sasic / Stock.xchng

Dr. Alan Brown has attempted to recreate a process that he thinks is similar to déjà vu. In studies at Duke University and SMU, he and colleague Elizabeth Marsh put the idea of subliminal suggestion to the test. They showed photographs of various locations to a group of students, with the plan to ask them which locations were familiar. Prior to showing them some of the photographs, however, they flashed the photos onto the screen at subliminal speeds -- around 10 to 20 milliseconds -- which is long enough for the brain to register the photo but not long enough for the student to be consciously aware of it. In these experiments, the images that had been shown subliminally were familiar at a much higher rate than those that were not -- even though those students who had actually been to those locations had been pulled from the study. Larry Jacoby and Kevin Whitehouse of Washington University did similar studies using lists of words with similar results using lists of words.

Based on this idea, Alan Brown proposed what he calls the cell phone theory (or divided attention). This means that when we are distracted with something else, we subliminally take in what's around us but may not truly register it consciously. Then, when we are able to focus on what we are doing, those surroundings appear to already be familiar to us even when they shouldn't be.

With this in mind, it is reasonable to see how we might walk into a house for the first time, perhaps while talking to our host, and experience déjà vu. It would work like this: before we've actually looked at the room, our brains have processed it visually and/or by smell or sound, so that when we actually look at it we get a feeling that we've been there before.