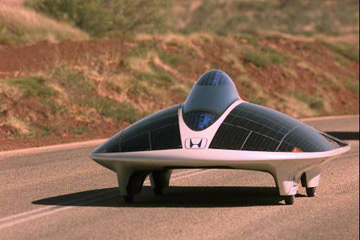 While solar-powered cars remain the stuff of science fiction tales for most of us, some forward-thinking engineers have been building -- and racing -- them for years. But designing a car to run on solar power is a tall order.

Solar panels aren't incredibly efficient -- most commercial panels can only boast an efficiency rating of around 15 percent. That means the panel is only able to convert 15 percent of the sunlight it receives into electricity. Some manufacturers have managed to get up to 42 percent efficiency in lab tests.

Solar-powered cars use electric motors instead of internal combustion engines. And most solar-powered cars are light, one-person vehicles. The lighter the vehicle, the less work the motor has to do to move the car. Vehicles tend to be flat and wide to maximize surface area while still being aerodynamic. Many solar-powered cars have a maximum speed between 40 and 60 miles per hour (64.4 and 96.6 kilometers per hour). That's not enough to make your average highway patrol officer bat an eye.

But the University of Michigan Solar Car Team raced a car in 2010 that could earn a heavy-footed driver more than a few speeding tickets. The team's car, called the Infinium, reportedly reached the record-breaking speed of 105 miles per hour (169 kilometers per hour) during a qualifying race for the American Solar Challenge, an annual solar-powered car race.

The University of Michigan team went on to win the 2010 American Solar Challenge. The six-day race was a tough 1,100-mile (1,770-kilometer) course and the car averaged 40 miles per hour (64.4 kilometers per hour) on a route that included intersections with stop lights.

As solar panel technology improves, we may see engineers incorporate it into other electric vehicle designs. While the cars in the solar races aren't meant for the average driver, other electric vehicles may use solar power to extend the distance they can travel before requiring a recharging station. Such vehicles won't be strictly solar-powered. But it may help bridge the gap between prototype race cars and practical vehicles. It may also give green drivers even more speed -- the Tesla Roadster, an electric sports car, has a top speed of 125 miles per hour (201.2 kilometers per hour)!

Learn more about solar power technology by following the links on the next page.