What makes you dizzy when you spin? 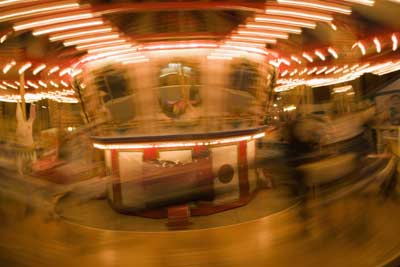 Riding a carousel might send your vestibular system into a frenzy.
Medioimages/Photodisc/Getty Images

If you have ever spun around like a top or rolled down a hill, then you have probably experienced dizziness or vertigo. Some people even get dizzy just getting up too fast from the sofa. When you become dizzy, a part of your body that senses motion has sent the wrong signal to your brain. An amazing system in your inner ear is the key to dizziness.

The body senses whether it is upright or lying down or whether it is moving or standing still through the vestibular system, which is in the upper portion of the inner ear. See an illustration of the ear here. Here is how the system senses orientation with respect to gravity:

Here is how the vestibular system senses motion: 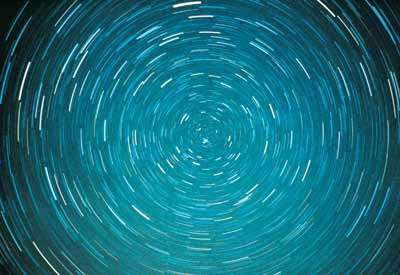 When you're dizzy,
Digital Vision/Getty Images

When you spin, the endolymph slowly moves in the direction you are spinning. The movement of the endolymph signals the brain that the head is spinning. The brain quickly adapts to the signal because the endolymph begins to move at the same rate that you are spinning and no longer stimulates the hair cells. However, when you stop spinning, the endolymph continues to move and stimulate hair cells in the opposite direction. These hair cells send signals to the brain. The brain determines that the head is still spinning, even though you have stopped. This is where the dizzy feeling comes from. Eventually, the endolymph stops moving, no signals are sent to the brain, your brain determines that your motion has stopped, and you no longer feel dizzy.

Try this short experiment, unless you are extremely sensitive to dizziness.

In the second situation, you have begun to move the endolymph in opposite directions and the two effects of motion tend to cancel out.

Frequently, astronauts in orbit become dizzy because, without the earth's strong gravity, they are constantly falling. Remember that sinking feeling in your stomach when your car hits a dip in the road or you experience a dip on a roller coaster ride. Imagine having that feeling all of the time! Because there is no clear orientation of gravity in space, the otolithic organs do not work well, so "up" or "down" becomes meaningless. Scuba divers have a similar experience. Buoyancy affects the otolithic organs in the same way as the lack of gravity does. Therefore, it is easy for a diver to become disoriented underwater and not know which way is up or down without other visual cues.