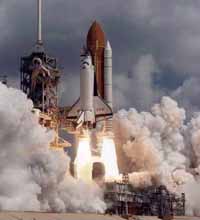 From a distance, a space shuttle looks pretty sturdy. It's enormous and solid, and it can withstand extreme temperatures when it enters the Earth's atmosphere. But in some ways, a space shuttle is delicate. NASA describes it as the "most complex machine ever built." A fully loaded shuttle weighs around 1,300,000 pounds (589,670 kilograms) and includes lots of complex circuitry and moving parts, all of which can break. In the past, tiny failures have led to disasters like the destruction of Challenger in 1986 and Columbia in 2003.

Most of the time, delays in a space shuttle's launch stem from its complexity and relative fragility. NASA will delay, or scrub, a launch after detecting an existing or potential problem. Delaying the launch can allow threats to dissipate or give officials time to diagnose and repair problems.

­Weather is a common cause for delay. Before la­unch, NASA uses weather balloons, Doppler radars, weather radars and other equipment to keep an eye on conditions around the launch pad. Weather conditions that can lead to delay include:

Mechanical difficulties are the other primary cause of launch delays. Before launch, people and sensors monitor the shuttle's vital functions. If anyone notices an anomaly, the countdown stops so that workers can find and fix the problem. Mechanical failure in the shuttle's payload can also delay a launch. For example, if the shuttle's mission involves deploying a satellite and the satellite's sensors fail, the launch may be delayed.

Often, the space shuttle remains on the launch pad while the weather clears or maintenance workers address technical problems. But sometimes, the shuttle has to be moved back to the Vehicle Assembly Building (VAB). This is known as a rollback. There were 17 rollbacks between October 1983 and August 2006. Six of these were the result of weather, while the others stemmed from technical problems or mechanical failures. One rollback was the result of a flock of woodpeckers pecking holes in the external fuel tank's insulation.

Some launch delays last only a few minutes, but even a very short delay can cause a shuttle to miss its launch window. If the shuttle's mission requires it to reach a specific destination, the launch window can be very short -- from a few minutes to two hours. Launch windows can also close because of NASA's agreements with other space agencies. For instance, NASA works with the Russian government to make sure shuttle missions to the International Space Station do not conflict with Soyuz missions to the same destination.

For more information about space shuttle launches and other topics you might be interested in, check out the next page.­

The clock stops frequently during a countdown to a shuttle launch. These countdown holds aren't the same as delays. They're planned, built-in buffers that let staff and crew take care of specific pre-launch preparations.