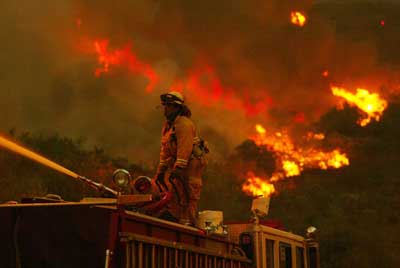 A firefighter battles a wildfire with a high-powered water cannon from atop a fire engine.
Donald Miralle/Getty Images News/Getty Images

Whether you're looking to squelch a roaring apartment fire, stop a prison riot or crack down on a little free speech, there's one important piece of technology you'll want at your disposal: the water cannon. While animals such as the bombardier beetle and various species of cephal­opods have possessed the ability to shoot powerful jets of fluid for millions of years, human technology has only caught up over the last few centuries.

Although recent years have seen the increased use of water cannons as a nonviolent crowd control measure, 18th and 19th century citizens were far more concerned with controlling urban fires. Before the advent of the water cannon, fire brigades depended largely on bucket lines, in which firefighters passed bucket after bucket up to the front of the line to douse the flames. Obviously, this put severe limits on what firefighters could accomplish. Sometimes the only option was to dynamite the burning building in an attempt to suffocate the flame or to tear down adjacent buildings, creating a firebreak to keep the destruction from spreading.

­During the 16th century, firefighting organizations such as the London Fire Brigade began to use simple water cannons. Some of these were essentially hand-held plunger devices -- much like a large syringe or some of the water guns you'd find in a toy store today. Other water cannons implemented a primitive version of what would become the modern standard: a pumping system, water tank and a water cannon or deluge gun. While a few firefighters manually worked the pumps, another aimed the water cannon at the flames. Some of these systems still required manual bucketing to keep the tank filled, but improved hose construction soon cut out all the elbow work.­

During the 19th century, inventors made huge strides in steam technology, leading to the development of horse-drawn steam engines. These engines used the expansion of water into steam to work the pumps powered formerly by human labor. Gasoline motors began to replace steam power in the early 1900s and, while the engines have improved a lot, the basic technology remains the same.

But how do modern water cannons actually propel so much water so far? Find out on the next page.