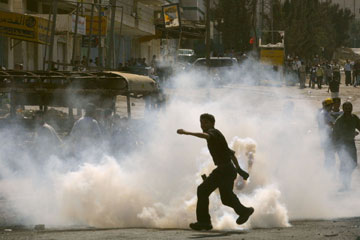 A Palestinian throws a tear gas grenade back at Israeli soldiers during a 2001 clash on the outskirts of the West Bank town of Ramallah.
David Silverman/Getty Images

Trailing white fumes, a silver canister arches over the no-man's-land between the armored riot police and the bulk of your fellow protesters.

You duck, but the canister falls short and lands amid the people in front of you. The white fumes begin to billow up like fake smoke at a magic show, but there's nothing fake about the cries you hear. People shriek. They wail. They flee backward through the crowd, tears and mucus flowing freely from reddened faces. They cough and rub their eyes maddeningly. Some of them double over and retch.

You turn to flee, too, but that's when the cloud of white powder hits you full in the face. You pinch your eyes shut at the sudden sting. You gasp, and the burning sensation seers its way into your sinuses and down your throat. It's as if you've swallowed fire.

Forcing your eyes open, you find the world has blurred. The screaming crowd scatters, and all is chaos. You feel as if you'll never breathe or see again.

Yes, you've been hit with tear gas, a substance used around the world to disperse crowds and control riot situations. While you'll probably recover fully in an hour's time, it's not an experience you'll forget. Just what is this dreadful stuff, and why does it feel like you've been licked full in the face by the devil himself?

In this article, we'll pop open the silver canister and discuss what tear gas is, why it's legal and what you can do to make the burning stop.