How can someone control a machine with her thoughts? 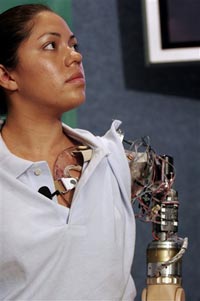 This week, the Rehabilitation Institute of Chicago introduced the first woman to be fitted with its "bionic arm" technology. Claudia Mitchell, who had her left arm amputated at the shoulder after a motorcycle accident, can now grab a drawer pull with her prosthetic hand by thinking, "grab drawer pull." That a person can successfully control multiple, complex movements of a prosthetic limb with his or her thoughts opens up a world of possibility for amputees. The setup -- both surgical and technological -- that makes this feat possible is almost as amazing as the results of the procedure.

The "bionic arm" technology is possible primarily because of two facts of amputation. First, the motor cortex in the brain (the area that controls voluntary muscle movements) is still sending out control signals even if certain voluntary muscles are no longer available for control; and second, when doctors amputate a limb, they don't remove all of the nerves that once carried signals to that limb. So if a person's arm is gone, there are working nerve stubs that end in the shoulder and simply have nowhere to send their information. If those nerve endings can be redirected to a working muscle group, then when a person thinks "grab handle with hand," and the brain sends out the corresponding signals to the nerves that should communicate with the hand, those signals end up at the working muscle group instead of at the dead end of the shoulder.

Rerouting those nerves is not a simple task. Dr. Todd Kuiken of the RIC developed the procedure, which he calls "targeted muscle reinnervation." Surgeons basically dissect the shoulder to access the nerve endings that control the movements of arm joints like the elbow, wrist and hand. Then, without damaging the nerves, they redirect the endings to a working muscle group. In the case of the RIC's "bionic arm," surgeons attach the nerve endings to a set of chest muscles. It takes several months for the nerves to grow into those muscles and become fully integrated. The end result is a redirection of control signals: The motor cortex sends out signals for the arm and hand through nerve passageways as it always did; but instead of those signals ending up at the shoulder, they end up at the chest.

To use those signals to control the bionic arm, the RIC setup places electrodes on the surface of the chest muscles. Each electrode controls one of the six motors that move the prosthetic arm's joints. When a person thinks "open hand," the brain sends the "open hand" signal to the appropriate nerve, now located in the chest. When the nerve ending receives the signal, the chest muscle it's connected to contracts. When the "open hand" chest muscle contracts, the electrode on that muscle detects the activation and tells the motor controlling the bionic hand to open. And since each nerve ending is integrated into a different piece of chest muscle, a person wearing the bionic arm can move all six motors simultaneously, resulting in a pretty natural range of motions for the prosthesis.

For more information on RIC's "bionic arm," robotic prostheses and related topics, visit the next page.

50 Years After '2001: A Space Odyssey,' How Close Are We to HAL 9000?
Seiichi Miyake Created Tactile Paving System to Help Visually Impaired
How Wave Pools Work