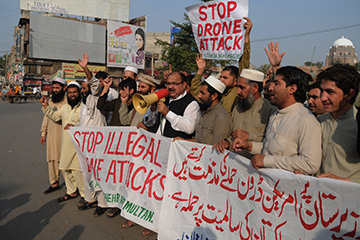 Drones are touted as a more efficient way of targeting bad guys, but the rate of civilian casualties has sparked worldwide protests.
Ahmad Kamal/Xinhua Press/Corbis

In 2013 President Barack Obama gave a speech justifying the drone program using three main points. First, he argued that terrorists are bad people who will try to kill Americans unless someone stops them. Second, he pointed out that terrorists like to hide in places where local governments have little or no influence, so the United States has to respond instead. Finally, he suggested that drones are the best of many bad options. Traditional air strikes are less accurate and more likely to cause collateral damage. Using Special Operations puts more American lives in danger, and invasions, as we've seen in Iraq and Afghanistan, can be difficult to contain [source: Fisher].

Not everyone agrees with that assessment, though. One of the most common criticisms is drone strikes sometimes kill innocent civilians; indeed, the highest estimates place civilian deaths at 1,125 in Pakistan, Yemen and Somalia as of May 2015 [sources: New America, BIJ]. In one such tragic instance in the Waziristan region of Pakistan in April 2015, a drone strike killed two hostages — one American and one Italian [source: Walsh]. The administration counters that while civilian deaths are regrettable, even more would die if the terrorists were allowed to live and carry out their attacks, not just in the United States, but also in the very communities where the drone strikes happen.

The other main criticism involves the legality of the strikes under both U.S. and international law. As we mentioned earlier, the Authorization for Use of Military Force (AUMF) gave the president the authority to attack those responsible for the Sept. 11 terrorist attacks. But 15 years later, with Osama bin Laden dead and al-Qaida on the run, many question whether the terrorists now killed by drones can really be linked to those original attacks. The administration justifies today's strikes by interpreting the AUMF to include "associated forces," though that phrase doesn't actually appear in the resolution. Perhaps most concerning to critics is that the Obama administration includes U.S. citizens in this group, meaning they can be killed without a trial. That's what happed to New Mexico native Anwar al-Awlaki — and his son, Colorado-born Abdulrahman — in Yemen in 2009 [sources: Global Justice Clinic, Currier].

Finally, numerous questions have come from the international community, including United Nations officials, who argue that drone attacks run afoul of international law. They contend that these rules prohibit killings in areas not recognized as being in an armed conflict. In response, the Obama administration has argued that the strikes are legal because they're carried out in self-defense [source: Bowcott].

The Future of Drone Strikes

Although the number of drone strikes has declined each year in Pakistan and Yemen from a high in 2010 and 2012, respectively, the United States has not set a date for the end of the drone program. So the question remains, as one senior military official put it: "How long can we continue to chase offshoots of offshoots around the world?" [sources: New America, Klaidman]

If there's one issue that demonstrates the complexity of the world's problems, it's drone strikes. Imagine for a minute that you're the one responsible for approving an attack on a suspected terrorist. Killing him could mean you save innocent lives. But it could also mean you take a few, too. Could you do it? No matter what side of this issue you're on, there's not an easy answer. That's what struck me while writing this article: Drone strikes really are just one of many bad options.