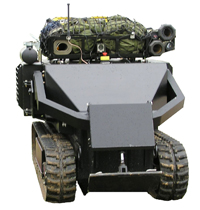 Everyone knows that being a soldier is a dangerous job, but some of the tasks that soldiers are required to do are more dangerous than others. Walking through minefields, deactivating unexploded bombs or clearing out hostile buildings, for example, are some of the most dangerous tasks a person is asked to perform in the line of duty.

What if we could send robots to do these jobs instead of humans? Then, if something went wrong, we'd only lose the money it cost to build the robot instead of losing a human life. And we could always build more robots.

The U.S. military has been developing robotic systems for all sorts of jobs for years now, and some of them are even on the front lines in Iraq. In this article, we'll meet some of the military's latest robot soldiers, find out what sorts of jobs they can do and get a glimpse of what the future holds for military robots.

If you're interested in some background on the subject of robots in general before you learn about military-specific robots, check out How Robots Work.