How Intelligent Highways Will Work 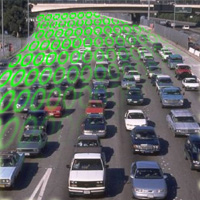 The main artery for travelling in and out of Toronto, Ontario, is Highway 401, a thoroughfare that expands to 12 to 14 lanes at its widest. And at more than 350,000 vehicles per day, including 45,000 trucks, Highway 401 is exceeded in terms of traffic volume only by the Santa Monica freeway in Los Angeles. "It's world-class congestion. It comes to a grinding halt at rush hour virtually every day," Brian Marshall, of the Canada Transportation Development Centre, said.

Traffic is a growing problem in almost every city in the world. The average American motorist spends 36 hours in traffic delays every year. The cost of traffic congestion just in the United States is $78 billion, representing the 4.5 billion hours of travel time and 6.8 billion gallons of fuel wasted sitting in traffic. Billions more dollars have been spent on electronics and systems to alleviate this logjam.

Government transportation agencies are seeking out new, cheaper technology to replace the high-priced loop sensors and other invasive technologies that have been used in the past. In this article, we will drive on the freeway of the future and see how ubiquitous digital devices will aid in easing our traffic woes.