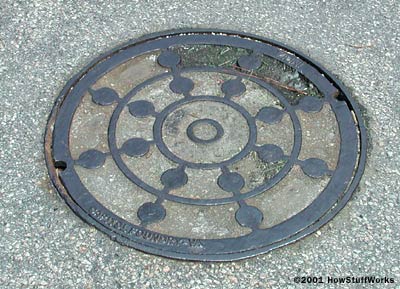 An 85-pound manhole cover can become a missile when blasted out of the ground.

Exploding manholes are one of those weird and interesting side effects of living in a large city. Imagine walking down the street when all of a sudden a manhole covers flies 50 feet in the air!

In this edition of HowStuffWorks, you'll learn what causes these blasts and how they compare to the combustion chamber of a car engine.

Explosions are typically caused when a spark from wiring ignites gas inside the manhole.

A cast-iron manhole cover can weigh between 85 and 300 pounds (35 to 136 kg), and explosions have propelled these massive discs anywhere from 1 foot to 50 feet (0.3 to 15 m) into the air. The real problem with these explosions (aside from the risk of injury) is the loss of power in the aftermath.

In most cases, these are the events that lead to an explosion:

Depending on the amount of gas-pressure built up inside the manhole, the cover may flip over or be launched several feet in the air. Often, there may not be an explosion, just a lot of smoke or fire.

Some power companies are in the process of replacing solid manhole covers with slotted manhole covers. These new covers allow the gas to be released less violently, and also give an early warning to possible explosions.

We don't often realize how much untapped energy exists all around us. The principle behind these manhole explosions is similar to how a car engine works. Imagine a city-sized engine with pistons as big as buildings. In this analogy, the manholes are the combustion chambers of the engine and the electrical lines are the spark plugs. These powerful manhole explosions could theoretically power the city if they happened often enough.

There's a very basic principle behind any reciprocating internal-combustion engine: If you put a tiny amount of high-energy fuel (like gasoline) in a small, enclosed space, and ignite it, an incredible amount of energy is released in the form of expanding gas.

To understand this, you need to understand the basic process of an internal-combustion engine. Here's what happens as the engine goes through its cycle:

For more information on the internal-combustion engine, see How Car Engines Work.

The manholes in question are already filled with an expanding gas, and any spark is going to expand it further. In a combustion engine, the explosion causes the gas to push up on a piston. In a manhole, the explosion pops the heavy manhole cover right out of the ground.

If it were possible to situate a piston over an exploding manhole, you might be able to use the power to turn a crankshaft. Each explosion would release enough force to push the piston. And if you connected the crankshaft to a generator, and explosions occurred frequently enough, you could tap the energy of these mishaps to supply power to the residents of an entire city!