by Allison Wachtel
NEXT PAGE 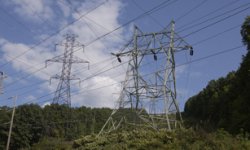 How much do you know about the power grid?
©AP Photo/Tony Fiorini

Did you know that the sun shines more energy onto the Earth's surface than all of its inhabitants use in an entire year? With growing concerns about dwindling resources like coal and oil, it's easy to see why green, clean and renewable power make up such a large part of the global conversation about energy -- especially because renewable systems are becoming increasingly practical for everyday citizens to install and use.

But environmental conservation isn't the only green reason to look into cleaner resources: Renewable energy could provide a substantial source of that other kind of green -- money -- for your household. With a little up-front cash and the right resources, individuals are making bank by selling electricity generated by renewable means back to the grid.

The grid, also known as the power grid, is the network of generators, cables and other transmission equipment that brings electricity from the place it's produced to wherever you use it. Traditionally, the birthplace of electricity is a power plant, where generators powered by coal, oil or natural gas -- all finite resources that cannot be regenerated (unless you've got a few million years on your hands) -- create the electricity that turns on your coffee maker, charges your computer and even powers up your Prius.

The majority of the energy that's consumed worldwide comes from a grid like this. However, renewable energy (energy that is produced using resources that naturally renew themselves over a short period) offers an alternative to these traditional processes. Whether power companies produce it or pay everyday citizens to produce it for them, renewable energy can also become a part of the grid.

So how can you get your hands on some of this cash while doing the environment a favor? Read on to find out.