by Alice Truong
Next 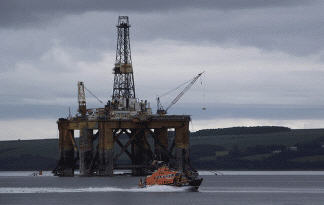 How much to know about understound oil deposits?
davidwilson1949/Creative Commons

The U.S. consumes 19.1 million barrels of petroleum each day -- almost half of it in the form of gasoline, according to the U.S. Energy Information Administration. Thanks to its car culture, the U.S. is the top oil consuming country in the world, but with the economic recession, dependence has significantly wound down since peaking in 2005, the agency says. By 2035, U.S. total consumption per day is estimated to total 21.9 billion barrels.

So how far do we have to drill to get a hold of this black gold? Over the last six decades, it’s only gotten deeper. In 1949, the earliest year with data available, the average depth of oil wells drilled was 3,635 feet. By 2008, the most recent data available, we were drilling an average of 5,964 feet, a slight decrease from the 2007 at 6,064 feet.

What are the implications of drilling depth? Since oil takes millions of years to form, for all intents and purposes, it’s a finite resource. We’re drilling deeper because we’re literally running out of oil. But depth comes at a cost. Deep offshore drilling requires more money and energy, not to mention hazards for both the environment and workers. Let us explain some of the challenges:

Drilling on land is an undertaking on its own. How do you drill in lightless ocean depths and transport all that liquid, gas and solid petroleum back to the surface? How do you keep from polluting the ocean? And how do you do all of this, with tons of special equipment, in the middle of rough seas?

The process isn’t perfect, as demonstrated with the Deepwater Horizon oil spill in 2010 that devastated communities and wildlife. Even today, scientists say that oil in the Gulf of Mexico continues to poison wildlife and poses a public risk.