Who Works at Alang? 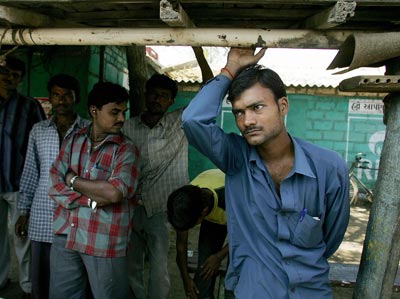 The work is grueling, but it pays the bills.
Sebastian D'Souza/AFP/­Getty Images

About 40,000 people work at Alang. An additional 200,000 people work in businesses connected to Alang [source: Langewiesche]. Most live in shantytowns surrounding the shipyard with limited sanitation and no electricity. Many of the men and teenagers working at Alang come from impoverished northern states of India such as Orissa, Bihar and Uttar Pradesh. Their workday begins at around 7:00 a.m. or 8:00 a.m. and doesn't end until 7:00 p.m. or 8:00 p.m. For their work, shipbreakers at Alang earn between $1 and $2 a day.

In addition to the accidents and explosions that might occur when dismantling a ship, workers are exposed to asbestos and chemicals found on older ships. Aside from health­ hazards directly related to shipbreaking, AIDS and other sexually transmitted diseases are problems among Alang workers. Men working at Alang leave their families back at home and prostitution abounds in the shantytowns surrounding shipyards.

Given the dangerous conditions, long work hours and low pay at Alang, why do people want to work there in the first place? Although some people say that Alang is a dangerous place to work, its workers are actually some of the most highly-paid unskilled laborers in India [Source: Zubrzycki]. By some standards, Alang's conditions are relatively good. They're far better than the conditions of some other shipbreaking yards. For example, shipbreakers in Bangladesh, a market in competition with Indian shipyards like Alang, are paid lower wages with even fewer safety and environmental regulations. For many of Alang's workers, the choice is to work at Alang for little money and under hazardous conditions or to go home and starve.

Let's see what other people are saying about the conditions surrounding Alang and the shipbreaking industry.

Brazilian] photojournalist Sebastiao Salgado included images of Alang workers in a 1993 photography exhibit that showed in Europe and in his book "." A larger Western audience viewed these emotive photos of laborers and ships and was exposed the conditions at Alang.