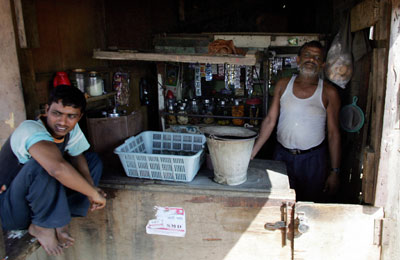 Responses from the international community have ignited change in the shipbreaking industry. Much of the uproar surrounding Alang began in 1996 when Baltimore Sun reporter Will Englund reported on shipbreaking. The issue of shipbreaking was of particular interest to his audience because Baltimore's once-thriving shipping industry had been slowly but surely exported abroad. Englund saw a ship owned by the U.S. Navy being dismantled in the harbor and soon learned about the legal, economic and environmental mess that surrounded the project. The Sun's editor decided to pursue the subject of shipbreaking full force.

What followed was an investigation into Alang, where most of the Navy's ships would be bound if a long-standing EPA export ban was lifted. Shocked by the condition­s they found there, Englund, joined by investigative reporter Gary Cohn, published the Alang story in December of 1997. Maryland Senator Barbara Mikulski launched a Senate investigation into Alang and the U.S. Navy's conduct. She called for the export ban to stay in place, and the Senate investigation brought national attention to what was seen as the Western world exploiting and polluting Alang.

Soon after the many people in America were introduced to the conditions at Alang, Northern Europe began to call for large-scale reform in shipbreaking. Images of Alang prompted some middle-class Europeans to view their own industries as contributing to developing nations' misery. Greenpeace in Amsterdam viewed Alang as the perfect symbol of international exploitation and launched an international campaign directed at Alang to change world shipbreaking standards. As a result, the European Union and the International Maritime Organization based in London have begun to regulate the sale of ships to Alang.

­Alang continues to be a source of controversy and probably will be for a long time to come. As long as developing nations require industry to grow their economies and developed nations also benefit, Alang and similar shipbreaking yards will continue to provide final resting places for many of the world's ships.

For more information on the Alang Shipyard, shipbreaking and other related topics, explore the links below.