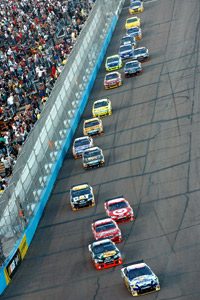 In the United States, more people watch NASCAR racing than baseball, supposedly "America's pastime." It's second only to football, with 75 million dedicated fans who tune in (or show up) almost every weekend of the year to watch stock cars race around a track at speeds up to ­­­­­­­190 mph (306 kph) [sources: Fulton, Eaton].

The cars' non-EPA-regulated engines and dangerously high speeds make the sport exciting to watch. They also make it one of the least environmentally friendly sports out there. NASCAR drivers make a living doing exactly what the rest of us are supposed to avoid in order to stave off global warming: Drive ridiculously powerful, gas-guzzling sports cars at extremely high speeds for entertainment value.

The sport burns so much fuel that the U.S. government labeled NASCAR a waste of gas during the fuel shortage of the 1970s. As a result, NASCAR shortened one of its races from 500 miles (804 kilometers) to 450 miles (724 kilometers) as a goodwill gesture. (It was a temporary change.)

So, just how much fuel does it take to hold a NASCAR race, and what effect does it really have on the state of the atmosphere? Is it a major CO2 contributor, or does it just get a bad rap because of the nature of the sport?

In this article, we'll find out whether NASCAR is as big an emitter as it seems. We'll check out the fuel and CO2 numbers, see how it compares to other activities, and look at the potentially "greener" future of the sport.

The first thing to understand when looking at NASCAR's carbon footprint is that race cars are even less like regular cars than some of us think. That speed comes at a price.