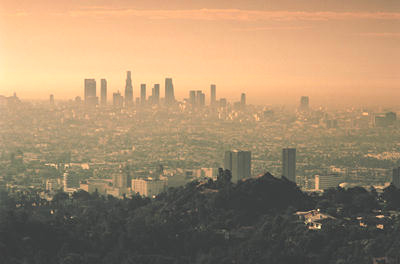 The weather report on the radio or TV tells you that it is going to be sunny and hot and that an orange ozone alert has been issued. What is ozone? What does an orange alert mean? Why should you be concerned about it?

In this article, we will examine what ozone is, how it is produced, what health hazards it poses and what you can do to reduce ozone pollution.

­­Ozone is a molecule of three oxygen atoms bound together (O3). It is unstable and highly reactive. Ozone is used as a bleach, a deodorizing agent, and a sterilization agent for air and drinking water. At low concentrations, it is toxic.

Ozone is found naturally in small concentrations in the stratosphere, a layer of Earth's upper atmosphere. In this upper atmosphere, ozone is made when ultraviolet light from the sun splits an oxygen molecule (O2), forming two single oxygen atoms. If a freed atom collides with an oxogen molecule, it becomes ozone. Stratospheric ozone has been called "good" ozone because it protects the Earth's surface from dangerous ultraviolet light.

Ozone can also be found in the troposphere, the lowest layer of the atmosphere. Tropospheric ozone (often termed "bad" ozone) is man-made, a result of air pollution from internal combustion engines and power plants. Automobile exhaust and industrial emissions release a family of nitrogen oxide gases (NOx) and volatile organic compounds (VOC), by-products of burning gasoline and coal. NOx and VOC combine chemically with oxygen to form ozone during sunny, high-temperature conditions of late spring, summer and early fall. High levels of ozone are usually formed in the heat of the afternoon and early evening, dissipating during the cooler nights.