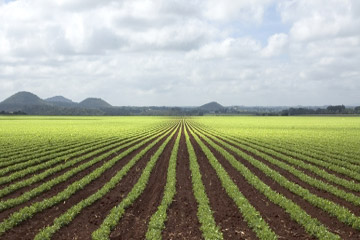 Food prices may be on the rise, but in the United States, food has never been cheaper. In the 1930s, Americans spent roughly a third of their income on food [source: Bureau of Labor Statistics]. Today, we spend less than 10 percent. For less than five dollars, we can buy a fast-food meal that weighs in at 1,200 calories -- more than half of our daily recommended intake. But all of that cheap food comes at huge costs to our health, our environment and our farmland.

Over the course of the 20th century, the introduction of chemical fertilizers gave rise to the factory farm. With a prescribed amount of chemical inputs, farmers could increase their yields (and therefore their profits) year after year, abandoning the ancient agricultural practices that had conserved the soil and ensured its continued fertility.

As far back as the first century A.D., the Roman writer Columella wrote about soil building techniques like rotating crops between grain, legume and fallow fields and applying animal manure for fertilizer. "The earth neither grows old, nor wears out, if it be dunged," he wrote [source: Gold].

But who needs mountains of stinking manure and profit-killing fallow fields when you have cheap nitrogen, phosphorus and potassium in a bag? Corn growers, with generous subsidies from the U.S. government, can pump out over 150 bushels of corn per acre by pumping in 10 million tons (about 9 billion kilograms) of fertilizer per year [source: Walsh]. Unfortunately, run-off from these fertilizer-soaked farms travels down the Mississippi River into the Gulf of Mexico, where it creates a seasonal "dead zone" covering over 7,000 square miles (18,130 square kilometers) of ocean, killing all sea life in its reach [source: Associated Press].

The glut of cheap corn is then fed to cows, pigs and chickens crammed into concentrated animal feeding operations (CAFOs). As their collective manure stagnates in massive lagoons, the hogs, cows and chickens are injected with high doses of antibiotics to protect them from the dangerous bacteria that thrive in such confined, unsanitary conditions. Seventy percent of the antibiotics administered in America are given to animals, not humans, speeding the evolution of drug-resistant bacterial strains [source: Walsh]. Still want that Big Mac?

Fortunately, there is an alternative to the factory farm system that is threatening our health and our environment. Sustainable agriculture is nothing new. Its methods have been practiced, even if not fully understood, for millennia. On the next page we'll discuss the goals of sustainable agriculture and how they can serve as an instruction manual for fixing a broken food system.