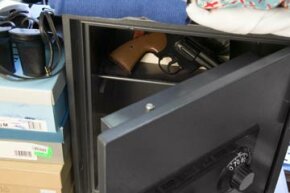 Most responsible gun owners know the choice to own a deadly weapon comes with the obligation to keep it secure. It's mostly common sense. To avoid accidents, thefts and other unfortunate ends, a gun should be inaccessible to pretty much everyone. That means, in most cases, a gun safe, and the logic goes: Insert firearm, don't make the code your birthday, and relax knowing your firearm is secure.

Then watch someone in footie pajamas open a gun safe, and you can start to rethink the logic.

A child's accidental death in 2010 triggered an investigation that revealed some startling truths. Three-year-old Ryan Owens of Washington state died of a gunshot wound after he got into his dad's police-department-issued, $36 Stack-On gun safe, leading to an independent assessment of that and other low-cost safe models [source: Tobias]. Results were presented at the hacking and security conference Def Con in 2012, and they go something like this: Not just one but multiple popular gun safes can, in fact, be opened by a toddler [source: Finkle].

Gun-related tragedies at home aren't rare. According to the Children's Defense Fund, the risk of accidental death in a home with a gun is four times higher than in a home without one. And since four out of 10 gun owners with children don't lock up their guns, the high incidence of tragedies affecting children isn't surprising. Indeed, nearly a quarter of children living with guns at home have accessed them without permission; and of all U.S. teens who commit suicide using a gun, more than half found the gun in their homes [source: Children's Defense Fund].

What is surprising, at least to those outside the lock-and-safe industry, is that some of those accidents are happening in homes where the weapons are locked in a gun safe.

A safe for storing guns isn't much different from any other kind of safe; it's designed to let certain people in while keeping everyone else out – and like any other kind of lockbox, it can fail. Still, storing firearms in a gun safe is a huge step toward increased security, both in human and property terms. Any good safe will do, but one designed for guns can make storing, organizing and accessing them a lot easier.

What makes a safe a "gun safe," then, is mostly a matter of practicality.

Most home safes have at least a few traits in common. They lock. They're typically heavy. They have drill-resistant steel in the walls and doors. They offer some degree of protection against the elements.

What differentiates a gun safe from a regular security cabinet are the overall dimensions and the interior storage features, both of which vary between models based on the types and numbers of guns they're designed to hold. Some varieties include:

Handgun Safes: A handgun safe can be as small (and as portable) as a briefcase, typically designed to hold one gun and useful for those who take a firearm everywhere. Larger handgun safes can hold multiple guns on multiple shelves in a unit about the size of a milk crate. They can be designed as car consoles for vehicle use.

Long-gun Safes: For longer guns like rifles and shotguns, a tall safe is required. An interior height of about 60 inches (150 centimeters) is good; width depends on the number of guns it can properly store [source: Home Safe HQ]. Capacities can range from one to dozens of guns [source: Tractor Supply Co].

Multi-use Gun Safes: Some "gun safes" are designed to hold long guns, handguns, jewelry, documents and anything else that might warrant increased security. They can be large or small, portable or stationary, and configured with various types of compartments (shelves, drawers, hooks) to securely hold a wide range of items.

In these basic terms, choosing a type of gun safe is pretty simple -- have one handgun and don't plan on buying more? Handgun safe. Avid rifle collector? Go with a high-capacity long-gun safe. But selecting specific features and accessories can be more confusing. Combination or digital lock? Inside or outside hinges? Do you need really humidity control? And what's the relationship between security and price?

Gun Safes and the Law

In California and some other states, you can be liable if your firearm is stolen and you did not own a safe [source: 6mmBR].

Space is only a starting point. There are several other considerations when buying a gun safe.

Dial vs. Electronic Lock: A dial or combination lock allows access when the proper numbers are entered in the proper order. This mechanism stands up over time and requires no maintenance. On the downside, the dial lock takes longer to open than an electronic lock and doesn't automatically lock when the safe door closes. Electronic locks, including keypad and fingerprint (biometric) locks, allow for faster, easier access and lock automatically, but, as with all electronic devices, they don't last forever, their parts can simply fail, and regular battery changes are required [source: 6mmBR].

Steel Strength: The walls and door of a safe are made of steel, and the thicker steel, the harder it is to drill into. Thickness is measured in gauge, and the smaller the gauge, the thicker the steel. A safe with 10-gauge walls is more secure than one with 14-gauge walls [source: 6mmBR].

Weight: Large gun safes can range from hundreds to thousands of pounds. To discourage thieves with dollies, 750 pounds (340 kilograms) empty is a good minimum. Ideally, they should also be bolted to the floor or wall [source: 6mmBR].

Fire Protection: Some say fire is a greater danger than theft for gun owners. House fires can reach 1,200 Fahrenheit (650 Celsius) in 10 minutes, and some guns melt at 800 F (425 C), so fire protection is important. A fire-resistant safe has a thin, insulating liner and offers minimal protection against extended exposure to heat. A UL-rated fireproof safe is better. It is often equipped with more substantial sheetrock or ceramic panels that can keep the interior below 350 F (175 C) for 15 minutes to 4 hours, depending on model [source: 6mmBR].

Underwriters Laboratories provides independent safety reviews for products and technologies. A higher UL rating indicates a more secure safe. The minimum rating for a proper safe is RSC (residential security container), which means it can repel a simple entry attempt; the higher TL-30 rating means it can withstand a tool-based attack for at least 30 minutes[source: 6mmBR]. Not all manufacturers have their safes UL-rated. 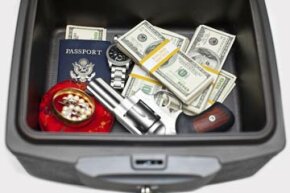 Safes are machines, so even the best ones can fail. The chances of any safe failing, however, skyrocket in the face of human error – like forgetting to spin the dial lock after shutting the door. If you don't spin it, it's not locked [source: 6mmBR].

Or forgetting to replace the battery in an electronic lock, not bothering to reset the manufacturer's default code when the safe arrives, or resetting the code and storing it on a shelf next to the safe.

Or storing combustible powder in a ventless steel safe, which is iffy at best, or ammunition in the same place as guns, which is discouraged universally by gun-safety experts [sources: Washington State Dept. of Social & Human Services, State of California Dept. of Justice].

Other failures, though, are due to manufacturer error. Some common problems include low-cost electronic locks that just don't work; very high-gauge steel that gives way with simple hand tools; and convenient but unwise lock-delay mechanisms that keep the safe accessible for several seconds after it's "locked" [source: McVicker].

When police investigated the safe that opened for 3-year-old Ryan Owens, they found a three-second delay on the lock, along with a more serious flaw: The lock occasionally failed completely if someone turned the dial a little to the right. (Police also said this seemed to be related specifically to Detective Owens' gun safe, and no other law enforcement officers in the county reported problems with their safes) [source: McVicker].

However, the company that presented at Def Con 2012 looked into several low-cost (under $200) safe models and found more of the same. Some could be opened with a little jiggle or bounce; others opened when drinking-straws or paperclips were stuck into holes in and around the locking mechanism [source: Finkle].

To reduce the risk of theft or accident, first look for a UL-rated safe that scores RSC or above (see sidebar). Then:

And if you have kids, talk to them about gun safety. To children, guns can look like toys, and divesting them of this notion is critical. If they find a gun, they should alert an adult immediately and not touch it. Because they may happen upon a loaded, unlocked gun at a friend's house, or at school, and properly using a gun safe at home won't help much with that.

To read about the safe models found by Security Laboratories of Investigative Law Offices to be faulty, check out http://www.thesidebar.org/insecurity/?p=793. From the looks of it, though, other low-cost safes may suffer the same problems, so before buying, read some of the independent reviews that are available from multiple firearms and home-security sources.

Up Next
How Locks Work
Explore More 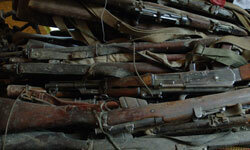 You May Like
What if I shot my TV?
Explore More
Keep Reading
How Machine Guns Work
Explore More